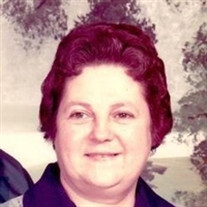 LOUISE S. FRIDLEY STAUNTON, VA Louise Elizabeth "Lou Lou" (Shiflett) Fridley, 80, widow of Raymond Edward Fridley, of 1429 Aiken Street, went to be with the Lord Saturday, November 16, 2013, at Augusta Nursing and Rehab. She was born February 8, 1933, in Augusta County, a daughter of the late Gilbert Earl and Thelma E. (Woods) Shiflett. Prior to retirement, Mrs. Fridley was employed by ASR and Western State Hospital. She loved spending time with her family, especially her grandchildren and great grandchildren. She will be missed, but never forgotten. Family members include two sons, Gary L. Fridley and his wife, Toni, and Terry D. Fridley, all of Staunton; three brothers, Henry D. Shiflett and his wife, Joyce, of Millboro, Wallace L. Shiflett of Staunton, and Danny Ray Shiflett and his wife, Annie, of Craigsville; three sisters, Joyce Brooks and her friend, Ernie Nuckoles, Patricia Varner, and Bernice Hammer and her husband, Don, all of Staunton; four grandchildren, Renee Tilman and her husband, Robbie, Mark, Kyanna, and Kathy Fridley; and four great grandchildren, Samantha Bird, McKenzie Tilman, and Katie and Ethan Fridley. In addition to her husband, she was preceded in death by two brothers, Earl K. Shiflett and Bobby W. Shiflett. A graveside service will be conducted at 1 p.m. on Wednesday, November 20, 2013, in Oaklawn Mausoleum and Memory Gardens. There will be no formal visitation at the funeral home, but friends may call at the residence at any time. Memorials may be made to Staunton Augusta Rescue Squad, 1601 North Coalter Street, Staunton, VA 24401.

The family of LOUISE ELIZABETH FRIDLEY created this Life Tributes page to make it easy to share your memories.

Send flowers to the FRIDLEY family.