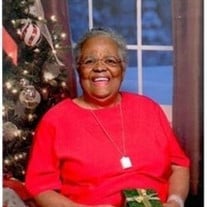 Lucy W. "Miss Tootsie" Lemons, 88, widow of Rossevelt Lemons, died Thursday morning, November 8, 2012 in King's Daughters' Community Health and Rehab Center, where she had been residing. She was born November 28, 1923 in Staunton, a daughter of the late Robert Lee , Sr., and Margaret Matilda (Ross) Jones. Prior to retiring, Mrs. Lemons was employed by DeJarnette and Western State Hospital. Family includes three sons and two daughters-in-law, Samuel and Judy Lemons, Winston and Darnise Lemons, and Everett Robinson, all of Staunton; four daughters and a son-in-law, Margaret and William Rodgers of Michigan, Johnnie Hackett, Jeannette Saunders, and Cecil Robinson, all of Staunton; a brother, Robert Lee Jones of New York; 15 grandchildren; 26 great grandchildren, and 14 great, great grandchildren. In addition to her husband, she was preceded in death by a daughter, Doris Lee Jones; a brother, Ernest Jones; and a sister, Elizabeth Jones. A funeral service will be conducted at 11 a.m. Wednesday, November 14, 2012 in the Henry Funeral Home Chapel by the Elder Thomas Johnson, Jr. Burial will be in Thornrose Cemetery. Active pallbearers will be William Jones, Willis Howard, Jermaine Foddrell, Philip Jones, Edward Jones II, and Jason Lemons. Honorary pallbearers will be friends attending the service. The family will receive friends from 6 until 7 p.m. Tuesday, November 13, 2012 in the funeral home and at other times at the home of her daughter, Mrs. Jeannette Saunders, 1731 Springhill Road, Staunton. Special thanks is hereby given by the family to her caregiver, Sheila Rankin, her Dr. Barbara Paszkowiak, the doctors and Emergency Room Staff of Augusta Health, and the staff of King's Daughters' Rehab Center and Henry Funeral Home.

The family of LUCY LEMONS created this Life Tributes page to make it easy to share your memories.

Send flowers to the LEMONS family.