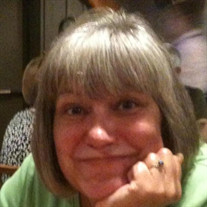 Leslie Lee Rohr, 60, widow of Donald “Mac” McGrath, passed away Saturday, March 26, 2022 at Kings Daughters Community Health and Rehabilitation Center, after a courageous battle with cancer. Ms. Rohr was born May 14, 1961 in Staunton to Jean Terry (Leistra) Rohr Wilkinson and the late James Robert Rohr. She attended the University of Louisiana and graduated from Blue Ridge Community College as a registered Nurse. She worked at Augusta Health until she and her husband, Mac, moved to Boston. After her son, Thomas was born she devoted herself to raising him. After moving back to Staunton, she worked at several local restaurants as a waitress. She would want me to thank her many friends for their constant loyalty and prayers during her illness. She is survived by her mother, Jean Wilkinson, a son, 2nd Lt. Thomas Donald McGrath and a sister, Brandy (Donna) McCraw, numerous cousins, nieces and nephews and Mac’s daughters, Bridgette, Catherine, Darien and Erin. In addition to her father and husband, she is preceded in death by a brother, James Robert Rohr II. A memorial service will be conducted at 2:00 PM, Saturday, April 23, 2022 in the Henry Funeral Home Chapel by Pastor Matt Painter. Burial will follow at Thornrose Cemetery. The family will receive friends following the services at Memorial Baptist Church. In lieu of flowers, memorial donations may be made to the American Cancer Society, 1445 E, Rio Rd E Suite 104, Charlottesville, VA 22901.

The family of Leslie L. Rohr created this Life Tributes page to make it easy to share your memories.

Send flowers to the Rohr family.