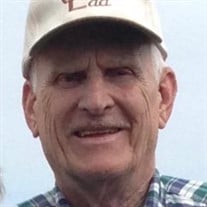 Lewis McDonald “Donald” Allen, Sr., 82, of Goshen, VA, passed away on Sunday, April 11, 2021, in Lexington, VA after a battle with dementia. He is preceded in death by his parents, John T. Allen, Jr. and Sarah Agnes McDonald Allen; and brother, John Thomas Allen, III. Surviving are his wife of 63 years, Alice (nee Wood) Allen; his son and daughter-in-law, Lewis and Neysa Allen of Roanoke, VA; and numerous cousins. Donald was a longtime member of the Goshen United Methodist Church and retired from Home Beneficial Life Insurance Company after 24 years of service. Throughout his life, Donald enjoyed his time in Goshen with his family and many friends. He was a great sportsman, loved being outdoors, and always looked forward to the fall hunting season with his Uncle James McDonald at the farm in Rockbridge Baths. Like his father, Donald was an exceptional fisherman and spent happy times on the waters in and around Goshen. Growing up in the 50’s and 60’s, Donald experienced the thrill of speed and had many fast cars and motorcycles. Later, he became interested in Red Cross First Aid through his friend, Millard Burke and served for many years on the Goshen Rescue Squad. Donald loved his little town, and the exceptional people who lived there. All of his experiences were enriched by family and friends and those left behind will sorely miss him. Funeral services will be conducted at the Goshen Baptist Church at 11 a.m. on Saturday, April 17, 2021, with Pastor Scott Reese and Pastor Joseph Dillon officiating. Interment will follow at the Allen family plot in the Riverview Cemetery of Goshen. The family will receive friends at the Church one hour prior to the service. Due to COVID-19, everyone is asked to wear masks and social distance. In lieu of flowers, donations may be made to the Goshen Rescue Squad or to the Hull’s Drive-In Theater Land Purchase Fund Henry Funeral Home is handling the arrangements. Condolences may be sent to the family at www.henryfuneralhome.net.

The family of LEWIS MCDONALD ALLEN SR created this Life Tributes page to make it easy to share your memories.

Send flowers to the ALLEN family.