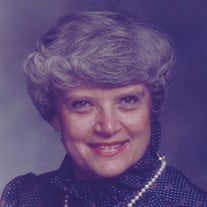 Lillian Johanna Walge, beloved mother, grandmother, and great-grandmother passed away peacefully at Royal Care of Birch Ridge on December 17, 2021. She was born on April 19, 1929, in Montgomery County, Pennsylvania to parents, Nicholas Graf and Johanna Bley Graf. She was an identical twin sister to Lorraine Elizabeth Graf Joseph who preceded her in death. She was married to Herbert H. Walge who passed away on August 10, 2019. Lillian was an elegant, gracious, magnetic woman who enjoyed people. Infinitely patient, she had great warmth and empathy, which served her well when she later became a nurse. She was extremely active in the community. She was a member of Women’s Evangelical Lutheran Church in America (WELCA) and other committees. She served as the first chairman of Christian Women’s Club sponsored by Stonecroft Ministries from 1974 to 1976, now known as the Women’s Connection. After caring for her mother-in-law who was terminally ill, Lillian recognized the need for support for those who are caregivers. This inspired her to go to college to become a registered nurse at age 50. She went on to initiate the Augusta Health Hospice of the Shenandoah where she served as a hospice nurse for 12 years and later as a volunteer. She also worked as a volunteer with Camp Dragonfly, a camp for children who are grieving. Lillian dearly loved her children, grandchildren, and great-grandchildren, never missing an opportunity to celebrate them. She enjoyed swimming, gardening, occasionally golf, and travel. Lillian is survived by her son, Nicholas John Walge (Maggie Ragon) and three daughters: Susan Erskine, Sharon Parrague (Lou Parrague), and Sandy Sockett (Mitchell Sockett). She has 11 grandchildren and 5 great-grandchildren. A memorial service for the immediate family will be held at Christ Evangelical Lutheran Church. In lieu of flowers, donations can be made to the Church, 2807 N. Augusta Street, Staunton, Va. 24401.

The family of Lillian J. Walge created this Life Tributes page to make it easy to share your memories.

Send flowers to the Walge family.