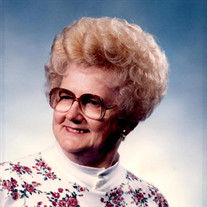 Louie Elzabeth (Pitsenbarger) Gutshall, the youngest of six children of Oliver Peter and Masie Naomi (Wilson) Pitsenbarger, was born August 2, 1924, at Doe Hill, Virginia. She peacefully entered eternal rest on Saturday, February 29, 2020, at Brookdale, Staunton at 95 years of age. She was preceded in death by her parents, and siblings, Frank, John, and William Pitsenbarger, Mary Hull, and Evelyn Bowers. She graduated from McDowell High School, playing on the varsity basketball team and later a traveling basketball team. On April 24, 1943, she married Winfree A. Gutshall in Pueblo, Colorado, who preceded her in death on October 29, 1989. She traveled by train from Virginia to meet Winfree who was there on Army assignment. After Winfree completed his military duty they resided in Monterey, VA where Winfree taught school, started a Vocational Agriculture program and Louie was a mother and homemaker. She made Staunton her home for over 50 years. She worked at American Safety Razor for 15 years and was a member of St. John’s United Methodist Church. She enjoyed sports and attended most of her children’s games. She was an avid cook and enjoyed preparing food for the family and pies and cakes for fellow workers. At Christmas and holidays many varieties of cakes and cookies were shared. Gardening flowers and vegetables was one of her passions as well as crocheting and painting pictures. Louie always had a kind heart and loving soul. She loved working and playing with children and reading them stories. She is survived by sons, Allen of Mt. Sidney and wife, Susan (Bowman) Gutshall and their children, Josh (wife, Ann Hill), Jenny Rodriguez (husband, Alex Rodriguez), and Joey (wife, Kristi); Eddie of Suffolk and wife, Frances (Stokes) Gutshall and their children, Rachel and Joseph. Her son, Jerry Gutshall preceded her in death, his widow, Linda (Beasley) Gutshall and their son, Jeremy of Chesterfield County. There are six great grandchildren, Henry, Gus, Betsy, Freddie, Carter, and Morgan living in the Valley. The family will receive family and friends from 9 until 11 a.m. Saturday, March 7, 2020, at Henry Funeral Home, 1030 West Beverley Street, Staunton, VA, followed by the services at 11 a.m. A service will be conducted by St. John’s United Methodist Church lead pastor, Rev. Chuck Cole. Honorary pallbearers will include, Josh, Joey, Joseph, and Jeremy Gutshall, and Alex Rodriguez. Burial will follow at Augusta Memorial Park. Memorials may be made to Crusade for Christ, P.O. Box 628222, Orlando, FL 32862-8222 or to American Cancer Society, 1445 E. Rio Road, Suite 104, Charlottesville, VA 22901.

The family of Louie E. Gutshall created this Life Tributes page to make it easy to share your memories.

Send flowers to the Gutshall family.