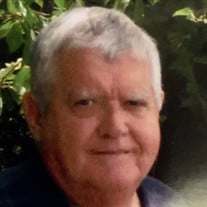 Lyle Douglas Painter, Sr., 76, widower of Alma Sue (Cox) Painter, of 717 Cherry Hill Drive, died Thursday, December 5, 2019, at Shenandoah Hospice House, Fishersville, surrounded by family and friends. He was born October 31, 1943 in Lofton, a son of the late Herman and Myrtle (Lawhorne)Painter. Prior to retirement, Mr. Painter was employed by DuPont with 37 ½ years of service. He also drove a Quick’s Bus for over 40 years. He was a member of Pleasant View Evangelical Lutheran Church and the Horseshoe Hunt Club. He never met a stranger, was a friend to everyone, a jokester, and was full of life. He was a proud supporter of the Riverheads Athletics. In addition to his wife, he was also preceded in death by a daughter, Cherie Collins; four sisters; and three brothers. Family members include a son and daughter-in-law, Lyle Douglas, Jr., and Sandi Painter of Staunton; a son-in-law, Creed Collins; a brother and sister-in-law, Phillip and Virginia Painter; a brother-in-law, Fred B. Cox of Mt. Sidney; two sisters-in-law, Jean Cox of Staunton and Mary Jane Farmer of Mechanicsville; a grandson, Ian Hensley and wife, Stephanie; three great grandchildren, Cameron, Emily, and Gavyen Hensley; and numerous nieces and nephews. A funeral service will be conducted at 11 a.m. Monday, December 9, 2019, in Pleasant View Evangelical Lutheran Church by the Revs. Larry Clouster and Kenneth Price. Burial will follow in the Church cemetery. Pallbearers will be Scott Weeks, Chris Harris, Shawn Swisher, Jack Borden, Mike Whedbee, Mike Cox, Ron Hubbard, Wes Allred, Jeff Byrd, Patrick Kerr, Dale Ward, and Ian Hensley. Honorary pallbearers will be members of the Horseshoe Hunt Club. The family will receive friends from 4 until 6 p.m. Sunday, December 8, 2019, in Henry Funeral Home and other times at the son’s residence, 2022 Old Greenville Road, Staunton. Memorials may be made to Pleasant View Evangelical Lutheran Church, 2733 Springhill Road, Staunton, VA 24401. The family would like to thank the staff of the Augusta Health ER and Shenandoah Hospice House for their kindness and support. Condolences may be sent to the family at www.henryfuneralhome.net.

The family of Lyle Douglas Painter Sr. created this Life Tributes page to make it easy to share your memories.

Customized sympathy cards. Mailed for you.