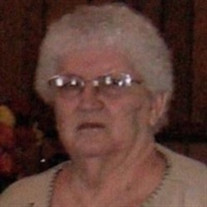 MAE P. FLAVIN STAUNTON, VA Mae Virginia (Parrish) Flavin, 77, widow of Paul Clifford Flavin, of 329 Gray Ave., died Saturday, July 21, 2012, at her residence. She was born November 12, 1934, in Augusta County, a daughter of the late Marvin Hampton and Ada Blanche Parrish. She graduated from Mt. Sidney High School as valedictorian , Class of 1952. Prior to retirement, Mrs. Flavin was employed by Genesco and Big Lots. She was a member of Memorial Baptist Church and Woodmen of the World. She was a flower girl for her special aunt, Jennie McAllister, in 1940. In addition to her husband who preceded her in death on November 19, 2005, she was also preceded in death by four brothers, Marvin Jr., Lucian, Howard, and Sidney Parrish. Family members include three sons and two daughters-in-law, Danny and Edith Flavin of Greenville, Phillip Flavin of Charlottesville, and Jeff and Gaby Flavin of Staunton; a daughter and son-in-law, Penny and Tim Huffman of Staunton; nine grandchildren, Michael and Missy Flavin, Brandi and Chris Hemp, Erica Flavin and Matt, April Flavin and Garrett, Trisha Flavin, Korri Rodgers, Alexis Flavin, Brysen Adams, and Amber Adams; and five great grandchildren, Trinity Redman, Sebastian Underwood, Bryan Hemp, Brandon Hemp, and Jacob Hemp. She was the last surviving member of her immediate family. A graveside service will be conducted at 10 a.m. Wednesday, July 25, 2012, in Augusta Memorial Park by Rev. Temple D. Myers. The family will receive friends from 6 until 8 p.m. Tuesday, July 24, 2012, in the Henry Funeral Home. The family would like to give a special thanks to Karen McLean, who has become an adopted member of our family, to the Legacy Hospice, and the workers of Care Advantage, who took great care of Mom/Maw-Maw.

The family of MAE VIRGINIA FLAVIN created this Life Tributes page to make it easy to share your memories.

Send flowers to the FLAVIN family.