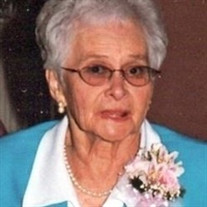 Fishersville, VA Mardee Beydler (Michael) Kiser, 92, widow of Boyd Alfred Kiser, formerly of Staunton, died on Tuesday, June 12 at Shenandoah Nursing Home. She was born on June 2, 1920 at Mossy Creek, VA, a daughter of the late Whitney and Carrie (Crum) Michael. Prior to her retirement in 1985 she was employed by the Staunton City School System where she served as dietician and Cafeteria Manager at Thomas Dixon School. She previously worked at Beverley Manor Elementary School. For more than 65 years Mardee was a faithful member of the Staunton Church of Brethren and for many years volunteered at Kings Daughters Hospital. She was a pillar of strength and inspiration to her family and all who knew her. In addition to her husband, who died March 10, 1985, she was preceded in death by six brothers, Weldon, Hinkle, Kay, William Levi (W.L.), Stanley and Leo Michael and two sisters, Hester Jane and Dicie Michael Hutchinson. Family members include two daughters and sons-in-law, Wanda Kiser Morris and Robert Morris of Staunton; Ferral Kiser and Bryan Quick of Bridgewater and a son, Galen Boyd Kiser and daughter-in-law, Mary Kiser, of Woodbridge, VA; five grandsons, Bryan (B.J.) Quick and wife Tracey of Clearbrook, VA; Michael Morris and wife Allison of Waynesboro, Tim Morris of Staunton; Nathan Quick and wife Angie of Charlotte, NC; and Sean Kiser of Woodbridge; three great grandchildren, five step great grandchildren and a step great, great grandson. She is also survived by four sisters, Drehla Sours of Mt. Sidney; Wona Faye Puffenbarger of Bridgewater, Flossie Andrews of Harrisonburg, and Lois Lam and her husband, Herbert, of Bridgewater; and brother Ray Michael and his wife, Thelma, of Bridgewater and a special friend Phyllis Lunsford. A memorial service will be held at 11 a.m. Friday, June 15, 2012, at the Staunton Church of Brethren by the Rev. Scott Duffey. The family will receive friends after the memorial service. Burial will be private in Oaklawn Mausoleum & Memory Gardens. Friends may call anytime on Thursday at Henry Funeral Home. Active pallbearers will be Ernie Landes, and her grandsons, Bryan Quick, Jr., Michael Morris, Timothy Morris, Nathan Quick, and Sean Kiser. Honorary pallbearers will be The Senior Adult Group, Pathfinders Class, and members of Mary Martha Circle. Mardee's wishes were that all her nephews be honorary pallbearers. Memorials may be made to the Staunton Church of Brethren Capital Improvement Fund, 1615 North Coalter Street, Staunton. The family would like to thank the staff at Shenandoah Nursing Home for the love and support shown not only to Mardee but to the entire Kiser family. Henry Funeral Home is handling the arrangements. Condolences may be sent to the family at www.henryfuneralhome.net.

The family of MARDEE BEYDLER KISER created this Life Tributes page to make it easy to share your memories.

Send flowers to the KISER family.