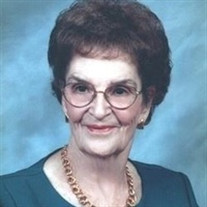 MARGARET S. PICK STAUNTON, VA Margaret Lucille (Sheffer) Pick, 92, widow of James R. Pick of Staunton, died Wednesday, August 22, 2012, at Brightview at Baldwin Park. She was born May 19, 1920, in Cass, West Virginia, to the late John Henry and Nellie B. (Wine) Sheffer. Prior to retirement, Mrs. Pick was employed at the Virginia School for the Deaf and Blind where she enjoyed baking breads and desserts for the students and staff. She was a member of Cherryvale United Methodist Church and was an active member of the Cherryvale United Methodist Women. She was a member of the Staunton Loyal Order of the Moose, the Augusta-Staunton VFW Post 2216 Ladies Auxiliary, the American Legion Staunton Lodge 13 Women's Auxiliary, and an active member of the American Association of Retired Persons. She was beloved by all who knew her and will be remembered for her devotion to her family, her love of entertaining family and friends, her love of traveling, and her love of Colonial Beach, Virginia where she enjoyed fishing and crabbing along the Potomac River with her grandchildren and great grandchildren. She is preceded in death by her husbands, Crawford Landes to whom she was married on October 10, 1940, Willie B. Whisman, Sr., to whom she was married on August 9, 1947, and James Pick to whom she was married on October 29, 1978; her brothers and sister, Earnest Harvey Sheffer, Jessie James Sheffer, John Paul Sheffer, and Mary Frances (Sheffer) Morris; her daughter, Linda Whisman Brown; a grandson-in-law, Sean Supko; and great granddaughter, Savannah Swandal. A devoted wife, mother, grandmother, and great grandmother, she is survived by her two sons, Gary W. Landes and his wife, Peggy Vess of Greenville, TN, Willie B. Whisman, Jr. and his wife Kathryn Kinsey of Bristol, TN; her daughter Sharon Whisman Miller and her husband, Earl Thomas of Verona; a son-in-law, Wayne K. Brown; step-son, James R. Pick, Jr. and his wife Judy, of Pittsboro, NC; ten grandchildren and fifteen great grandchildren, Bart and Vicki Landes of London, OH, Bruce and Robin Landes and their children, Ashley and Luke of Mt. Juliet, Rick Miller of Buena Vista, Kenny and Bonnie Brown of Verona and son Evan, Jeff and Suzie Miller and their children, Caroline and Laura,of Mt. Solon, Denise and Ron Lowman, and their children, David, Cord, Maggie,and Elizabeth of Staunton, Chris Brown of Verona, and Rebecca Brown of Mt. Sidney and their children, Chloe and Parker, Burt and Leah Whisman and their son, Noah of Abingdon, Beth Supko and her children Cole and William of Smithfield, and Richelle Whisman of Jonesborough, Tennessee. She is also survived by brothers, Roy J. Sheffer of Mount Solon, Harold "Gene" Sheffer of Dayton, Donald L. Sheffer of Bridgewater, Clifford L. Sheffer of Mt. Sidney, and numerous nieces and nephews. A celebration of life will be held at 10:00 a.m., Tuesday, August 28, 2012 in the Henry Funeral Home Chapel by Pastor DeBorah Barnwell. Burial will follow in Augusta Memorial Park. Active pallbearers will be her grandsons. The family will receive friends from 7-8:30 p.m., Monday, August 27, 2012 in the funeral home. Memorials may be made to the United Methodist Women of Cherryvale United Methodist Church, 709 Cherry Hill Drive, Staunton, VA 24401.

The family of MARGARET LUCILLE PICK created this Life Tributes page to make it easy to share your memories.

Send flowers to the PICK family.