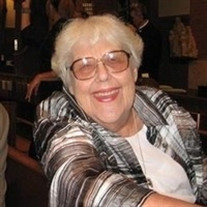 STAUNTON, VA. Marilyn Ann Depew died peacefully Saturday, February 23, 2013 at Augusta Health. Marilyn was born May 15, 1926 in Asbury Park, New Jersey. She was preceded in death by her parents, Arthur and Louise Vitalius, infant grandson Alex Lee Lekavich, and her husband of 61 years, Calvin Richard Depew. Marilyn met her husband while both were students at Cornell University. Mr. and Mrs. Depew were residents of Staunton since 1954 and were the longtime proprietors of Staunton Bowling Lanes. Both were active in the community and Marilyn was a proud supporter of the Staunton SPCA. Marilyn's greatest joy and lasting legacy was her family. Surviving are her devoted children, Calvin R. Depew, Jr, of Virginia Beach, Robert A. Depew of Staunton and Carol Lee Lekavich of Norfolk, and children-in-law, Kennet Depew, Carol Depew and Robert Putney. She is also survived by her six beautiful and loving grandchildren, Jessica Abbott and husband Scott of Doylestown, PA, Michael Depew and wife, Jamie of North Huntington, PA, Greg Lekavich and girlfriend, Erin Sharpe of Gastonia, NC, Mark Depew of Los Angeles, CA, Abby Berquist and husband John of Kitty Hawk, NC, and Megan McCormack and husband, John of Fredericksburg, VA. Marilyn is also survived by her two precious great-grandsons, Grayson and Ryeland McCormack, and was blessed to learn of the expected arrival of two more great-grandchildren in 2013. Also surviving Marilyn, are her beloved sisters, Jean Harvey and Ruth Hoffmann and her husband Charles, and many nieces and nephews. The family wishes to express their gratitude to the staff of Home Instead and her dedicated caregivers, Linda, Loretta and Delores, who so lovingly cared for Marilyn these past eighteen months. The family would also like to acknowledge the professionalism and genuine kindness and care provided by the medical staff at Augusta Health during Marilyn's final days. It will always be remembered and appreciated. Arrangements for burial are by Henry Funeral Home and services will be private. A celebration of Marilyn's life is planned for the family on the Outer Banks, where they had a summer home. It will be a day filled with love and laughter by the ocean Marilyn so loved. In remembrance of Marilyn Depew, donations can be made to the Augusta Regional SPCA or the Central and Western Virginia Chapter of the Alzheimer's Association, 1160 Pepsi Place, Suite 306, Charlottesville, VA 22901.

The family of MARILYN ANN DEPEW created this Life Tributes page to make it easy to share your memories.

Send flowers to the DEPEW family.