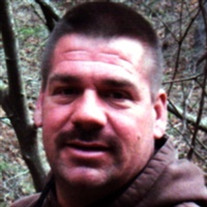 MARK A. ALLEN STUARTS DRAFT, VA Mark Anthony Allen, 43, of 163 Forest Springs Drive, went to be with his Savior and Lord on Tuesday, February 26, 2013, at his residence. He was born on June 24, 1969, in Waynesboro, to Richard Allman and Mary J. (Byrd) Allen. He was a mechanic by trade who helped anyone at any time in need of mechanical work. He worked very often with a handshake. Mark was involved in different sports, guiding his son, Brandon in many winning seasons in Go-Kart racing. He was involved with Amanda's softball tournaments as well as his church softball team. Mark was heavily involved in local stock car racing, having been the Crew Chief for Car #43, guiding them to several winning seasons. He was a member of Mountain View Mennonite Church. In addition to his parents, family members include a son, Brandon Allen; a daughter, Amanda Allen; his fiancé, Julia Hoy and her daughter, Jessica; a sister, Kim Allen Nelson of Waynesboro; a brother, Ronnie Allen of Stuarts Draft; a special nephew, Steven Allen; and the mother of his children, Kimberly Rankin Allen of Fishersville. A funeral service will be conducted at 11:00 a.m. on Friday, March 1, 2013 in the Henry Funeral Home Chapel by Pastor Earl Monroe. Burial will follow in Thornrose Cemetery. Active pallbearers will be his special friends, Buck Roadcap, Kenny Tanner, Mike Rankin, Todd Robords, Robert Shultz, Spyder Benson, Kenny Beverly, and Ronnie Allen. Honorary pallbearers will be his special friends, Chuck Groah, Ron Campbell, Sam Sensabaugh, Garland Cash, and Dick Taylor. Family will receive friends from 7:00 until 9:00 p.m. on Thursday evening in Henry Funeral Home and other times at the homes of his parent's and his fiancé, Julia. Memorials may be made to the Augusta Health Hope Cancer Center, 57 Beam Lane, Suite 300, Fishersville, VA 22939 or the Mountain View Mennonite Church recreation fund, P.O. Box 208 Lyndhurst, VA 22952. Condolences may be sent to the family at www.henryfuneralhome.net.

MARK A. ALLEN STUARTS DRAFT, VA Mark Anthony Allen, 43, of 163 Forest Springs Drive, went to be with his Savior and Lord on Tuesday, February 26, 2013, at his residence. He was born on June 24, 1969, in Waynesboro, to Richard Allman and Mary... View Obituary & Service Information

The family of MARK ANTHONY ALLEN created this Life Tributes page to make it easy to share your memories.

Send flowers to the ALLEN family.