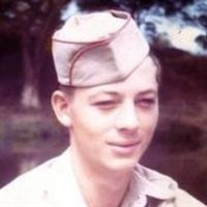 MARK A HARLOW, SR. STAUNTON, VA... Mark Alexander Harlow, Sr., 86, cherished husband of 63 years to Dorothy Day Harlow of Staunton entered his heavenly home Friday, April 22, 2011. He was born on May 26, 1924 in Rockbridge County to Elam and Hattie Ryan Harlow. He served his country in the South Pacific during World War II. Prior to his retirement, he was employed by Western State Hospital, as an electrician, for 22 years. He was preceded in death by his parents, his stepfather, Dave Runkle, and four sisters, Minnie Ellinger, Orleen Beck, and two infant sisters. In addition to his wife, he is survived by two daughters, Patricia Gayhart and husband Danny of Churchville, Linda Harlow-Caudill and husband Terry of Las Vegas, NV, and one son, Mark Harlow Jr. and wife Karen of Staunton; one grandson, David Taylor of Staunton, one step-grandson, David Gayhart and wife Dawn of Bridgewater, and five granddaughters, Daphne Lee and husband Devin of Las Vegas, Andrea Barker of Las Vegas, Dawn Smith of Las Vegas, Danielle Dundas and husband William of Churchville, and Caitlin Harlow of Staunton; seven great-grandchildren; a nephew, Harry Ellinger of Staunton, and a niece, Janet Ellinger of Staunton. Active Pallbearers include Layne King, Dave Steele Jr., Mark Wagner, Buddy Wagner, David Gayhart, and Chub Rexrode. The family will receive friends at Henry Funeral Home from 6:30 to 8:30 pm Monday, April 25th and at other times at the residence. The graveside service will take place Tuesday, April 26th at 2:00 pm at McElwee Chapel Cemetery in Rockbridge County. The family would also like to thank the staff of Augusta Health, especially the Emergency Room and Intensive Care Unit, for their care, love, and patience throughout the last week.

The family of MARK ALEXANDER HARLOW, SR. created this Life Tributes page to make it easy to share your memories.

Send flowers to the HARLOW, family.