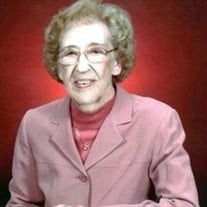 MARY A. AREHART STAUNTON, VA Mary Allen (Page) Arehart, 88, widow of John Preston (J. P.) Arehart, Sr., died Saturday, February 11, 2012 at Augusta Nursing and Rehabilitation Center in Fishersville. She was born on March 14, 1923 in Batesville, Virginia, a daughter of the late Charles T. Page, Sr. and Mary (Barksdale) Page. She was a member of Trinity Episcopal Church and former member of the Staunton Business and Professional Women's Club. Family members include a daughter, Betty Page (Arehart) Bennett and son-in-law Kendall J. Bennett of Staunton; and a son John Preston Arehart, Jr. and daughter-in-law Karleen C. Arehart of Greenville; four grandchildren, Amy C. Kirtley and husband Frank, John P. Arehart III, Julie A. Longley and husband Michael; Jeremy S. Arehart and fiancée Kristin Bosserman; a step-granddaughter, Robyn B. Nevins; four great grandchildren, Gregory Kirtley, Alex Kirtley, Ella Page Arehart, and Samuel Longley; a sister-in-law, Rose (McCormick) Page; and a number of nieces and nephews. Mrs. Arehart was the last surviving member of her immediate family. In addition to her parents and husband, she was preceded in death by a sister, Virginia (Page) Mackey and three brothers, Gordon H. Page, Charles T. Page, Jr. and Hamilton Page; and a grandson, Gregory Neil Cobb. Mary Allen was a graduate of Greenwood High School and Dunsmore Business School. Upon graduation she worked for the Highway Department in Staunton. After her marriage to J. P., they made their home in Fairfield. She was a homemaker and a stay at home mom. When she returned to work, she was employed by the U. S. Government (General Services Administration) in their Lexington office. In 1973, she relocated to Hagerstown, MD where she was the Executive Administrator of the GSA office. Upon retirement in 1990, she returned to Staunton where she enjoyed spending time with her family, grandchildren, and friends, and was affectionately known as "Meemaw" to everyone. She will be greatly missed by all. A memorial service will be conducted on Tuesday , February 14 at 11 A.M. in Old Providence ARP Church by the Rev. H. Max Bolin and the Rev. Temple D. Myers. Family will receive friends following the service in Providence Hall. Active pallbearers will be Frank Kirtley, Gregory Kirtley, Alex Kirtley, John Arehart III, Jeremy Arehart, Michael Longley, and Bobby Arehart. In lieu of flowers, memorials may be sent to the Blue Ridge Area Food Bank at 96 Laurel Hill Road, Verona, VA 24482.

The family of MARY ALLEN AREHART created this Life Tributes page to make it easy to share your memories.

Send flowers to the AREHART family.