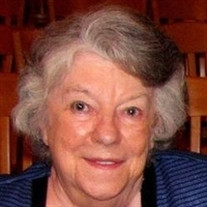 Mary Lou Stevens Hammond Staunton,VA Mary Lou (Stevens) Hammond, 78, mother of Jo Ellen Hammond Opyoke, of Staunton, died Monday, October 28, 2013 at Augusta Health, Fishersville. She was born September 15, 1935, in Fairmont, WV, the daughter of the late Henry Stevens and Lucy Mildred (Kenner) Wells. As a young woman from Colfax, WV, Mary Lou worked for the Orlando Sentinel in Orlando, Florida, where she met and married William Neil Hammond of Oklahoma City in May of 1953. After having their two children in Orlando, the mountains of West Virginia called them home. For a brief time on Sunday mornings, Mary Lou sang alto in a trio with her cousin, Barbara Ellen Nichols and family friend, Anita Freeman at a small radio station in Fairmont. She also sang at Colfax UMC church in the choir. Music was an important part of her life. Prior to retirement, she worked as a florist, dental assistant and did monogramming for Jones Fur Service, all of Fairmont, WV. Mary Lou loved cooking. She passed on many a secret family recipe to anyone who wanted it. It is safe to say that she had mastered the many uses of Cream of Mushroom soup and made the best tuna casserole with potato chips on top. Mary Lou was also a voracious reader and loved good conversation. As a regular watcher of Wheel of Fortune and Jeopardy, she almost always won. Camping in their 1979 VW Pop-top van was another hobby that was shared with friends Lysbeth and Harry Huster. Camping in Seneca Rocks, WV, Pigeon Forge, TN and Canada were favorite topics of conversation and held such good memories. Family members include a son, Steven Neil Hammond; a daughter, Jo Ellen Hammond Opyoke and husband, Terry; two grandchildren, William Wayne Opyoke and wife, Bonnie, Jennie Lynn Opyoke and husband, Matt Lively; a great granddaughter, Abigail Opyoke; first cousins, Sally Hale Nims and Nancy Hale Douglas and husband, Stephen Douglas; second cousin, Amy Douglas McCarty and son, Hayden McCarty. Family in Oklahoma City, OK includes a nephew, Robert Gregg, II and family and niece, Judy Gregg and family. In addition to her husband, she was preceded in death by her mother, father, step-fathers, A.J. Arnett and Elmer Deacon Wells; a cousin, Barbara Ellen Nichols; aunt, Virginia Hale and husband, Robert Hale; and lifelong friends, Lysbeth and Harry Huster. Most importantly, she loved her family and friends totally and with all of her heart. A memorial service will be conducted at 11 a.m. on Saturday, December 7th, 2013 in the Henry Funeral Home Chapel. The family will receive friends one hour prior to the service in the funeral home. Memorials may be made to a charity of your choice in lieu of flowers. The family is ever grateful for the loving care showed their mother at the end of her life.

The family of MARY LOU HAMMOND created this Life Tributes page to make it easy to share your memories.

Send flowers to the HAMMOND family.