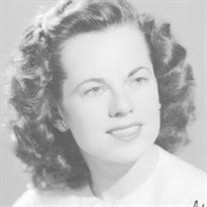 MARY A. LITTLE STAUNTON, VA Mary Eloise (Ames) Little, 93, widow of Warren Henry "Sarge" Little, of Staunton, VA, died Thursday, September 12, 2013, in Augusta Nursing and Rehab Center, Fishersville. She was born November 28, 1919, in Jacksonville, Florida, a daughter of the late Frank Harvey and Doris Belle (McTeigue) Ames. She was part of the Five Ames Sisters from Nutley, New Jersey, which was a dance and tap group. They went on to perform in New York City as a Vaudeville Act. The Five Ames Sisters opened for Sammy Davis, Jr., Frank Sinatra, Henny Youngman, Milton Berle, Bill "Bojangles" Robinson, and others. As the other sisters married she went off on her own and joined the Marvelettes and other acts. She joined the USO during World War II and met her husband while he was stationed in Okinawa, Japan. She was a member of Emmanuel Episcopal Church. Family members include two sons and a daughter-in-law, John William and Cathy Little of Booneville, Missouri and Scot Thomas Little of Staunton; two daughters and a son-in-law, Linda Lee Little of Staunton and Judy Anne and Pete Matthews of Palm Coast, Florida; a brother and sister-in-law, Frank and Midge Ames of Peabody, Massachusetts; one sister, Dorothy of Lakeland, Florida; six grandchildren, Shiloe Barnett and husband, Ryan, of Brandy Station, Virginia, Summer Earnest of Staunton, Tom Little, Ben Little and wife Kristi, all of Missouri, Adam Knighting and fiancé, Blair Mullins, of Jacksonville, Florida, and Amanda Knighting of Staunton; two great grandchildren, Madison Earnest of Staunton and Zoey Little of Missouri; her beloved dog, Molly; and a large number of nieces and nephews. In addition to her husband, she was preceded in death by three sisters, Alice, Barbara, and Marjorie. A funeral service will be conducted at 11 a.m. on Saturday, September 21, 2013, in Emmanuel Episcopal Church by the Rev. Shelby Owen. A reception will follow. Henry Funeral Home is handling the arrangements.

The family of MARY ELOISE LITTLE created this Life Tributes page to make it easy to share your memories.

Send flowers to the LITTLE family.