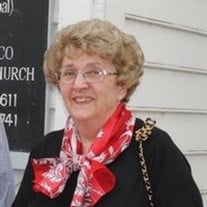 JANE R. SELPH RICHMOND, VA Mary Jane Robinette Selph, 78, of Richmond, VA, passed away April 19, 2013. She was born in Lee Co., VA and formerly lived in Staunton, VA. Jane was preceded in death by her husband, Gerald L. Selph, and her parents Cecil and Flora (Fannon) Robinette. She is survived by her brother, Charles Robinette and wife, Sally, of Knoxville, TN; her son, John, of Richmond; her daughter, Ellen (Selph) Ward and husband, Joe, and her granddaughters, Sarah and Emily of St. Louis, MO; her stepdaughter, Nancylee Stewart of Coos Bay, OR; and many loving cousins, nieces and nephews. Jane shared her smiles and wonderful sense of humor touching the lives of coworkers at the Medical Society of Virginia and formerly with coworkers at the P. Buckley Moss Museum. In 1974 alongside her husband, they built and operated the Weyers Cave Pharmacy in Weyers Cave, serving the local community for many years. Jane graduated from Big Stone Gap High School and Mary Washington College. She is a Distinguished Honorary Alumna and served as a past Trustee at Stuart Hall School in Staunton. She also served as a past Chairwoman of the Valley Community Services Board. All who knew Jane felt her love, warmth and appreciation. With listening ears and a kind heart, she helped to solve problems and to gently comfort those around her with wisdom or a funny story. She will be missed and always in our hearts. A memorial service will be conducted at 1 p.m. Saturday, April 27, 2013, at the Henry Funeral Home Chapel in Staunton, by the Rev. John Sullivan. The family will receive friends for one hour following the service. Burial will be private for the family at 12:15 p.m. in Thornrose Cemetery. Honorary pallbearers will be Edgar Paul Fannon, Larry Fannon, Kenny Fannon, Jackie Fannon, Dewey Wayne Fannon, and David Tribble. In lieu of flowers, memorial contributions may be made to The Conservation Fund (www.conservationfund.org) or The American Cancer Society.

The family of MARY JANE SELPH created this Life Tributes page to make it easy to share your memories.

Send flowers to the SELPH family.