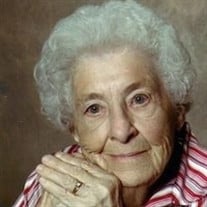 MATTIE M. CLATTERBAUGH STAUNTON, VA Mattie Virginia "Ginny" (Miller) Clatterbaugh, 88, widow of Johnnie Mills Clatterbaugh, died Monday, August 1, 2011, in Augusta Nursing and Rehab Center, Fishersville. She was born October 24, 1922, in Staunton, a daughter of the late Mac C. and Mattie Kate (Davis) Miller. Prior to retirement, Mrs. Clatterbaugh was employed by Genesco with over 40 years of service and the Staunton V.F.W. Post 2216 Auxiliary. She was a long time member of the Staunton Church of Christ, teaching Sunday school. Upon moving to Waynesboro, she was a member of West Waynesboro Church of Christ. In addition to her husband, she was preceded in death a sister, Elizabeth Trammell; and two brothers, Robert and Harry Miller. Family members include a brother and sister-in-law, Fredric L. and Judith Miller of Waynesboro, with whom she made her home for 7 years. Before entering the nursing facility, she was cared for by her nephew, Fredric "Butch" Miller and his wife, Tammy, of Fishersville. She is also survived by a number of nieces and nephews and three devoted and caring friends, Glenn Craig, Bonnie Craig, and Marie Strickler. Her life was characterized by a gentle nature, quiet strength and dignity, faith, and boundless love for her family. She will be missed by her family and those that had the pleasure of knowing her. A funeral service will be conducted at 9 a.m. Friday, August 5, 2011, in the Henry Funeral Home Chapel by Revs. Jonathan Feathers and Harold W. "Pete" Campbell. Burial will follow in Thornrose Cemetery. Active pallbearers will be Ricky Miller, Butch Miller, Vernon Miller, Tom Strickler, Glenn Craig, and Lyle Fitzgerald. The family will receive friends from 7 until 8 p.m. Thursday, August 4, 2011, in the funeral home and other times at the home of her brother, Fred Miller, 2140 Belvue Road, Waynesboro. Memorials may be made to a charity of one's choice.

The family of MATTIE VIRGINIA CLATTERBAUGH created this Life Tributes page to make it easy to share your memories.

Send flowers to the CLATTERBAUGH family.