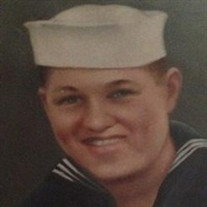 MAURICE L. ELLIOTT STAUNTON, VA Maurice Lee Elliott, 73, husband of Lina M. Elliott, of 123 Fraser Lane, died Tuesday, July 2, 2013, at his residence. He was born November 7, 1939, in St. Marys, OH, a son of the late Maurice Henry and Ruth Louise (Koiner) Elliott. Mr. Elliott served in the U.S. Navy where he met his wife of 53 years on the island of Barbados. He retired from the Department of Corrections and Woodrow Wilson Rehab Center. He was an avid outdoorsman who loved to hunt and fish. He especially loved spending time with family, friends, grandkids, and his pets. He was a member of St. Francis of Assisi Catholic Church. In addition to his wife, family members include two sons and daughters-in-law, Maurice A. "Tony" and Evelyn Elliott of Millboro and Richard and Susan Elliott; a daughter and son-in-law, Angie E. and Jeff Shull; a sister-in-law, Anna Elliott; five grandchildren, Tanya, Ryan, Logan, Camryn, and Alex; a great grandchild, Mikayla; and numerous nieces and nephews. He was preceded in death by two brothers, John H. Elliott and Jerry L. Elliott. A funeral service will be conducted at 11 a.m. Friday, July 5, 2013, in the Henry Funeral Home Chapel by Monsignor Andrew Cason. Burial will follow at Oak Lawn Mausoleum and Memory Gardens with graveside rites conducted by Augusta Staunton VFW Post 2216. The family will receive friends one hour prior to the service at the funeral home and other times at the residence. The family would like to send a special thanks to Dr. Barry Munsey, Augusta Health Home Health, Continuing Care, and especially Sharon Wilson.

The family of MAURICE LEE ELLIOTT created this Life Tributes page to make it easy to share your memories.

Send flowers to the ELLIOTT family.