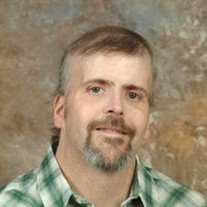 MICHAEL R. CORBIN SYRACUSE, NY Michael Ray Corbin, 44, formerly of Stuarts Draft, died Sunday, January 19, 2014 in University Hospital, Syracuse, New York. He was born April 6, 1969, in Staunton, he is the son of Sharon (Lotts) Wiseman of Staunton and the late Ray B. Corbin. Mike drove over 3 million miles in the past 24 years as an over the road tractor trailer driver. Of those 24 years, he was employed 10 years by the Caruso Cattle Company in New York. He was preceded in death by his maternal grandfather, Herbert L. Lotts and paternal grandparents, Gail B. and Bessie (Stinnett) Corbin. Survivors include his mother and step-father, Sharon and husband, Steven Wiseman of Staunton; a son, Jonathon Corbin and fiancée, Ciarra Lindsay of Staunton; a sister and brother-in-law, Connie and husband Tim Bruns of Beavercreek, Ohio; and his grandmother, Mildred (Hayes) Lotts of Staunton. A celebration of his life will be held Saturday, (April 5, 2014) at 3:00 p.m. in the Henry Funeral Home Chapel by Pastor Daniel V. Darrikhuma of the Staunton Seventh-Day Adventist Church. Following the service the family will receive friends. Burial will be in Mt. Carmel Presbyterian Church Cemetery, Steeles Tavern at 3:00 p.m. on Sunday, April 6, 2014 by Pastor Jamie McClanahan. Memorial contributions may be made to the American Cancer Society, 420 Neff Avenue, Suite 210, Harrisonburg, VA 22801

The family of MICHAEL RAY CORBIN created this Life Tributes page to make it easy to share your memories.

Send flowers to the CORBIN family.