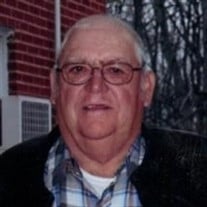 MILTON C. BRYANT MONTEBELLO, VA Milton Curtis Bryant, 71, husband of Doris Brooks Bryant, of 411 Fork Mountain Lane, died Friday, November 30, 2012, in Augusta Health, Fishersville. He was born August 15, 1941, in Montebello, a son of the late Melvin Zirkle and Lois (Bradley) Bryant. Prior to retirement, Mr. Bryant was employed by the National Park Service with 33 years of service and was also involved in farming. He was a member of Mt. Paran Baptist Church. In addition to his wife of 50 years, family members include a son and daughter-in-law, Steven A. and Susan Bryant of Montebello; a daughter and son-in-law, Darla "D" and Marshall Queen of Montebello; a very special best friend, Kenneth Fitzgerald; a brother, Windell Bryant of Montebello; three sisters and two brothers-in-law, Frances Rowe of Stuarts Draft, Betty and Lester Roberts of Montebello, Phyllis and Danny Myrtle of Raphine; four grandchildren, Christian Wright, Steven Bryant, Jr., Samantha and Stephanie Bryant; six step-grandchildren; and six great grandchildren. He was preceded in death by four brothers, Glen, Edgar, Bobby, and Gorman Bryant; and a sister, Christine. A funeral service will be conducted at 2 p.m. Monday, December 3, 2012, in Mt. Paran Baptist Church by the Revs. Fred Salmons and Billy Coffey. The family will receive friends one hour prior to the service at the church. Burial will follow in the Church Cemetery. Active pallbearers will be employees of Blue Ridge Parkway. Honorary pallbearers will be nieces and nephews. The family will receive friends from 7 until 9 p.m. on Sunday, December 2, 2012, in the Henry Funeral Home and other times at the residence. Memorials may be made to Mt. Paran Baptist Church, P.O. Box 156, Montebello, VA 24464. A special thanks to all the doctors and nurses of the Augusta Health Cancer Center.

The family of MILTON CURTIS BRYANT created this Life Tributes page to make it easy to share your memories.

Send flowers to the BRYANT family.