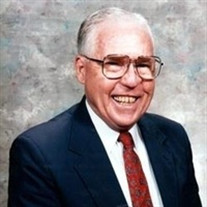 Mint Spring, VA The Reverend Morris Edward (Jack) Campbell, 85, husband of Nancy Scott Campbell of Mint Spring, was called home to be with the Lord on Thursday morning, January 31, 2013, at King's Daughters' Nursing Home in Staunton, VA. Born April 21, 1927, in Nelson County, VA, he was the youngest child of the late Conrad Patrick and Lucy Elizabeth Campbell. Jack was active at Rose Union Baptist Church in Roseland, VA, from a young age. He attended local schools and graduated from Fleetwood High School at Massie's Mill. He studied at Lynchburg College and the University of Richmond and received his Bachelor of Arts degree from the University in 1948. His theological training included studying at the Southern Baptist Theological Seminary in Louisville, KY, as well as at Southeastern Baptist Theological Seminary, Wake Forest, NC, where he earned a Master of Theology degree in 1963. Jack was privileged to serve as pastor at a number of churches in VA and NC. His longest tenure was at Linden Heights Baptist Church in Staunton where he served from 1968 to 1992. Following his retirement, he served as an interim pastor at four different churches in Augusta County and surrounding counties. In all of his churches, Jack was blessed to serve along with many faithful parishioners. In addition to serving as a minister, Jack taught English and Latin in various schools throughout Virginia and completed his teaching career at Riverheads High School in Augusta County. Moreover, he was honored to serve as chaplain of the Staunton Volunteer Fire Department until 1996. Singing was one of his passions and he greatly enjoyed singing with the Rockingham Male Chorus of Bridgewater, VA, until 1993. He also took great pleasure in reciting poetry and gardening. In addition to his parents, Jack was preceded in death by five brothers, Claude Conrad, Goode Daniel, Abraham, Russell Lee, and Wilbert Dandridge Campbell; and three sisters Mary Lillian Campbell White, Verba Virginia Campbell McKinney, and Lucy Ellen Campbell Massie. He was the last surviving sibling in his family. In addition to his devoted wife, Nancy, whom he married on June 21, 1958, he is survived by three daughters, Martha (Scottie) Campbell and husband Robert Jones of Fincastle, VA, Joanna Campbell Swanson of Durham, NC, and Jane Elizabeth Campbell of Richmond, VA; two step grandchildren, Joanna Gibson and Kathryn Jones; three step-great grandchildren; and a number of dearly loved nephews and nieces. Funeral services will be conducted at 11 a.m. on Tuesday, February 5, 2013, at Rose Union Baptist Church, Roseland, VA, with the Reverend John Patrick Campbell, pastor of Rose Union Baptist Church and Jack's nephew, and the Reverend Luke Smith, pastor of Linden Heights Baptist Church, officiating. Burial will be in the cemetery located next to Jonesboro Baptist Church, Roseland, VA. The family will receive friends on Monday, February 4 from 5-7 p.m. at Henry Funeral Home, Staunton, VA. The family wishes to express its deepest appreciation to compassionate family and friends for their unwavering support during Jack's long illness. The family requests that expressions of sympathy take the form of contributions to the Linden Heights Baptist Church Building Fund, 371 Linden Drive, Staunton, VA 24401, or Rose Union Baptist Church, 955 Tye Brook Hwy, Piney River, VA 22964, or to a charity of your choice. Condolences may be made sent to the family online at www.henryfuneralhome.net.

The family of MORRIS EDWARD CAMPBELL created this Life Tributes page to make it easy to share your memories.