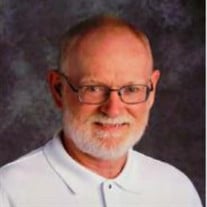 Mark Cameron Metcalfe, 66, of Mount Sidney, passed in his sleep at home, Wednesday, April 22. Born in 1954 in Manhattan, New York City, New York, he graduated from Alfred G. Berner High School in 1972. He attended N.C. State University, Hofstra University, and SUNY @ Oswego where he obtained a Bachelor’s of Science Degree in General Science, Biology, and Chemistry. He began his teaching career in 1977 at Blue Ridge Middle School in Loudoun County, VA. He also taught at Loudoun Valley High school, teaching Biology and Chemistry. In 1979 he married Nancy Lee Graham of Orange, VA. She was teaching elementary school in Loudoun County and they met through friends and playing in a coed Volleyball league. In 1981, they welcomed their first child, Stephen Graham Metcalfe and in 1984, they welcomed their second son, Patrick Lee Metcalfe. In 1987, they decided to move their family to the wonderful Shenandoah Valley and settled in their current home in Mount Sidney. Mark was hired as the Chemistry teacher at Fort Defiance High School and Nancy was hired at New Hope Elementary. In 1989, they welcomed their 3rd son, William Cameron Metcalfe and then Nancy was transferred to Verona Elementary where she spent 24 years, retiring after 38 years of teaching. Mark spent the next 30 years teaching Chemistry at Fort Defiance High School where he touched thousands of lives through sharing his love of Chemistry. His passion, patience, and ability to connect with students earned him an unparalleled respect from students, teachers, administrators, the Fort Defiance community, and beyond. He was coined as a “Master” and a “rare breed” with his talent for teaching Chemistry and connecting with students. He loved celebrating Mole Day and his enthusiasm spilled over into each student. He spent time attending numerous Science workshops at N.C. State University and James Madison University and was an active member of the American Chemical Society. He was voted as the Fort Defiance Teacher of the Year in 2017 and also received the prestigious Franklin D. Kizer Award from the American Chemical Society as one of the Top 3 Science Teachers in the state of Virginia. Mark spent many years as a VHSL Volleyball Official, working several State Tournament matches. He was well respected by other officials and Volleyball officials throughout the Shenandoah Valley and beyond. Mark was a wonderful husband to Nancy. They did everything together. They enjoyed travelling across the country and the world, seeing many of the beautiful sights this world has to offer. Their greatest love was seeing Lighthouses. They were able to see many of the Lighthouses on the Eastern Seaboard, the Great Lakes, and the Pacific Coast, even several in Alaska. Mark greatly enjoyed his train collection, going to train shows, and learning the american Railway system and its train companies. He enjoyed gardening and landscaping around his home. He was a member of the Arbor Day Foundation and enjoyed planting new trees each year. As a couple, they were a rock to each other; an example to follow, and a testament to what marriage is and should be. Even in Mark’s retirement speech, he spoke of Nancy’s strength and their bond together. You could always catch them going for their daily walk down the road. A wonderful Father to his three sons, he volunteered his time coaching his sons little league teams and when he was not helping to coach, he was always there supporting his sons. Always taking the time to engage in their interests, providing support, and advice. He was an avid supporter of his three sons' Cross Country careers. He always found great happiness from watching his sons perform in their races. Known as Granddaddy to all the grandkids. He had a kind and gentle way with all the grandkids and when he played with them, whether it was playing ball in the front yard, board games, puzzles, or computer games, they loved his energy, smile, and hugs. Mark was a member of Mount Pisgah United Methodist Church where he held numerous positions such as, Sunday School teacher and Financial Secretary. He also spent many years playing on the church softball team and enjoyed many years where he was able to play with his sons. His faith was very strong and something he took very seriously, always wearing a cross necklace close to his heart. Mark is preceded in death by his parents, William C. Metcalfe and Doris Bodecker Metcalfe. He is survived by his loving wife, Nancy Lee Metcalfe, and three sons, Stephen and wife Beth, Patrick and wife Randi, and William and Anna. He is survived by his grandchildren, (Stephen)Rhylan, Brantley, Grayson, Hayden; (Patrick) Calleigh and Wyatt; William (Paige). He is also survived by his sister Pamela and husband Albert Adam and children Krystle with husband Jim Walton, Eric Adam with wife Alicia, and Scott Adam. A memorial service will be conducted at a later date. Henry Funeral Home is handling the arrangements.

The family of Mark C. Metcalfe created this Life Tributes page to make it easy to share your memories.

Mark Cameron Metcalfe, 66, of Mount Sidney, passed in his sleep...

Send flowers to the Metcalfe family.