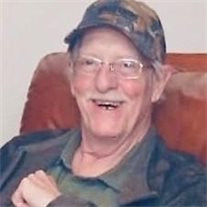 Mark Allen Weaver, 64, of Verona, VA passed Monday July 15th, 2019 at Carilion Roanoke Memorial Hospital. He was born December 9th, 1954 to the late Thomas and Janet Weaver. He was preceded in death by his brother Thomas (Tom) Weaver. He is survived by his daughters Catherine Weaver and Hillori Walsh, favorite son-in-law Kevin Walsh, his three grand-children Rowan Cai, and Ethan and Elaine (Ellie) McCorkle, his sister Jennifer (Jenny) VanName and spouse Gary, brother Kurt Weaver and spouse Stella, nephews Erik VanName, Charles VanName, Andrew Weaver, Ryan Weaver, Christopher Weaver, and Oliver Weaver. He is loved by all.     Mark was not a dull man and we would be remiss to say farewell in a dull way.     He was an artist, an athlete who enjoyed baseball in his early years. A leftie who threw mean darts, and could run a pool table. He had a deep love for music and his family. He was a loyal employee to Daikin and recently celebrated his 25th anniversary. He was a big brother and an incredible dad. He was a survivor and a fighter. He was a thinker. He was full of ideas and profound thoughts and wisdom. He was comfortable in his skin and unabashedly authentic and sincere. He was fashionable. He was kind. He was a collector of many things: hats, watches, stories, wonderful characters, and friends, but what he collected most were the hearts of everyone who had the pleasure of knowing him. He will be missed by many- far and wide.     Friends and Family please join us for a memorial service on Wednesday July 24th, 2019 at the Henry Funeral Home beginning at 5pm.     If you wish to make a charitable donation in lieu of flowers the family asks that you remember Mark through a donation in his name to the PKD Foundation. At his request, the family will hold a Celebration of Life Party to honor his life at a later time and location.

Mark Allen Weaver, 64, of Verona, VA passed Monday July 15th, 2019 at Carilion Roanoke Memorial Hospital. He was born December 9th, 1954 to the late Thomas and Janet Weaver. He was preceded in death by his brother Thomas (Tom) Weaver. He... View Obituary & Service Information

The family of Mark Allen Weaver created this Life Tributes page to make it easy to share your memories.

Send flowers to the Weaver family.