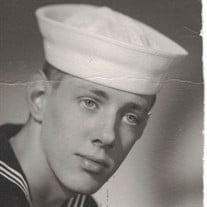 Martin Don Derfler, Jr., 75, widower of Sandra Lee (Schleicher) Derfler, of Eagle Rock Lane died Friday, December 11, 2020 in Augusta Health. He was born on August 23, 1945 in Pittsburgh, PA, a son of the late Martin, Sr. and Marie Derfler. Don was a member of Bethany Lutheran Church. He was a veteran of the U.S. Submarine Service where he served eight years and received the Navy Achievement Medal. He was a Training Manager for McQuay and a member of the Holland Club. He also served as a past president of the Valley Mustang Club. He loved to tinker and could fix most anything. He loved the beach, he loved America and was a patriot. He had a strong faith in God and imparted that to his family who will miss him dearly. Surviving family members include a son Lee E. Derfler of Wendell, NC, grandchildren, Lee E. Derfler, Jr., Nadia, Mason, and Kayce Derfler, Alexis and Jackson Derfler, Amerie McInnis, and Hannah and Hunter Cheney; a sister and brother-in-law, Mary Lou and Jerry Owens; a sister-in-law, Barbara Sims; a niece Lisa Williams and husband, Jim; a nephew, Daniel Cattani and wife, Meredith; great nieces, Alina and Jean Williams, and Leah Cattani. In addition to his wife, he was preceded in death by a son, Jason D. Derfler. A private graveside service will be conducted at Trinity Lutheran Church Cemetery by Pastor Tim Bohlmann. Memorials may be made to the Wounded Warrior Project, PO BOX 758516 Topeka, KS 66675; Tunnel to Towers Foundation, 2361 Hylan Boulevard, Staten Island, NY 10306, or Special Olympics, Virginia Area 5, 169 River View Drive, Verona, VA 24482.

The family of Martin D. Derfler Jr. created this Life Tributes page to make it easy to share your memories.

Send flowers to the Derfler family.