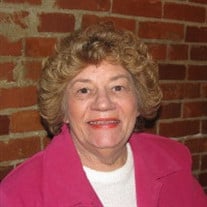 Mary Catherine (Sensabaugh) Beatty,80, formerly of Spottswood, Va, passed away on Friday, August 9, 2019 in Maryland. She was born on November 5, 1938 in Spottswood, VA, a daughter of the late Charles Preston and Annie Catherine (Morris) Sensabaugh. After graduating from Spottswood High School, she joined the Air Force, an uncommon choice for a farmer’s daughter in the 1950s.   She was stationed for much of the time at McGuire Air Force Base in New Jersey.   Following her honorable discharge, she worked as an agent for American Airlines at New York International (Idlewild) Airport, later known as JFK International Airport in New York.   While working there she met her future husband, Robert P.  Beatty.   She left the work force to raise two sons, Paul and Lane, eventually settling in Michigan where she returned to the airline industry during her sons’ college years.  She had many friends at Northwest Airlines and enjoyed traveling with them to destinations such as San Juan and the Cayman Islands.   Returning to Staunton, she had very happy retirement years enjoying her own home, before relocating to be closer to family.  In her retirement, she self-published a children’s book called “Little Blue:  The Smart Airplane” which was partially inspired by her work as an airline gate agent.   Writing it was a dream of hers since taking a creative writing class in community college, and the book, illustrated by paintings by her sister-in-law, Barbara Axt, is cherished by family and friends.   Her other biggest hobby in retirement was doting on her six grandchildren.   For many years, she could be counted on to drop everything at a moment’s notice whenever there was a care need or festivity involving any of her grandkids.   Each of them filled her with love and pride. She is survived by her two sons, Paul C. Beatty, currently in Kensington MD, and Lane T. Beatty currently in Rochester, NH; a brother, Thomas Sensabaugh  (Dana), of Mint Spring, Va; two sisters, Pauline Atmonavage and Betty Jean Crickenberger; and six grandchildren; Preston Beatty, Campbell Beatty, Adrienne Beatty, April Beatty, Alicia Beatty, Amelia Beatty, as well as numerous nieces and nephews and their children. She was preceded in death by one brother, Charles “Bub” Sensabaugh. A funeral service will be conducted at 11 a.m. on Thursday, August 15 at Old Providence ARP Church in Steeles Tavern, by the Rev. Patrick Malphrus. Burial will follow in the church cemetery. The family will receive friends from 6-8 p.m. on Wednesday, August 14 at Henry Funeral Home. Condolences may be sent to the family at www.henryfuneralhome.net In lieu of flowers, donations may be made to the Valley Program for Aging Services, 325 Pine Avenue PO Box 817, Waynesboro, VA  22980 or Old Providence ARP Church, 1005 Spottswood Rd, Steeles Tavern, VA.

Mary Catherine (Sensabaugh) Beatty,80, formerly of Spottswood, Va, passed away on Friday, August 9, 2019 in Maryland. She was born on November 5, 1938 in Spottswood, VA, a daughter of the late Charles Preston and Annie Catherine (Morris) Sensabaugh.... View Obituary & Service Information

The family of Mary Catherine (Sensabaugh) Beatty created this Life Tributes page to make it easy to share your memories.