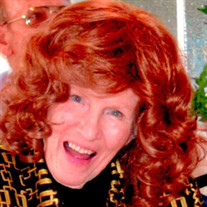 Meade Randolph (Jones) Loomis, 97, of Staunton died Friday, June 18, 2021, at her residence. She was born December 4, 1923, in Augusta County, a daughter of the late Francis Fitzgerald and Ethel (McClure) Jones. Prior to retirement, she... View Obituary & Service Information

The family of MEADE RANDOLPH LOOMIS created this Life Tributes page to make it easy to share your memories.

Send flowers to the LOOMIS family.