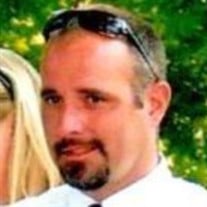 DEERFIELD &#8211; Michael Wayne Dill, Sr., 48, passed away Saturday, January 22, 2022 at his residence. Mr. Dill was born on September 6, 1973 in Gainesville, GA to the late Richard Wayne and Nancy Elaine (Brooks) Dill. He was an installer... View Obituary & Service Information

The family of Michael W. Dill Sr. created this Life Tributes page to make it easy to share your memories.

Send flowers to the Dill family.