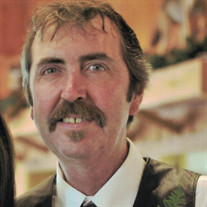 Michael Alan Sheets, 56, husband of Paige Ann (Agnor) Sheets, of Staunton, died Monday, October 5, 2020 at Augusta Health. He was born February 24, 1964 in Pittsburgh, Pennsylvania, a son of Phillip Edward and Alice Marie (Fortunato) Sheets. He was a welder and pipefitter for the Plumber and Steamfitters Union Local 10. Michael attended Grace Bible Church. He was a diehard Steelers fan. Michael was a loving son, husband, father, and grandfather, and had a great sense of humor. In addition to his wife of 27 years, family members include his children, Evan Michael Sheets and wife, Alicia, of Pennsylvania, Ashley Virginia Sheets Walther of Pennsylvania, and Jacob William Sheets of Staunton; a sister and brother-in-law, Sharon Ann and Mark Stuart of Pennsylvania; two grandsons, Aden Michael and Liam Allen Walther; brothers and sisters-in-law, Mark and Melissa Stokes and Michael and Robin Agnor; nephew and niece, Tony Lubinski and Alexandra Lang; and numerous other nieces and nephews. A Celebration of Life will be held at 6 p.m. on Thursday, October 8, 2020 in the Henry Funeral Home Chapel by Pastor Roy Trump. The family will receive friends one hour prior to the service in the funeral home.

The family of Michael A. Sheets created this Life Tributes page to make it easy to share your memories.

Send flowers to the Sheets family.