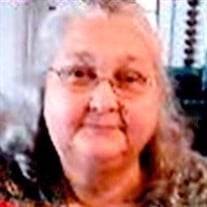 NANCEY D. SHOVER STAUNTON, VA Nancey Kathleen (Davis) Shover, 68, widow of George David Lee Shover, of 171 Montgomery Road, died Sunday April 13, 2014, at Augusta Health, Fishersville. She was born April 7, 1946, in Kittanning, PA, daughter of the late Robert and Miriam (Taylor) Davis. Prior to retirement, Mrs. Shover was employed by Lowe's as a cashier. She was a member of Good News Ministry and the Red Hat Society. Family members include two daughters, Miriam Kathleen Brown "CJ" of Tennessee and Ferraba Denise Brown of Waynesboro; a son, John David Shover, II of Staunton; a granddaughter, Amy Bell Thomas, who was raised in their home; eight grandchildren; nine great grandchildren; four brothers; and three sisters. In addition to her husband, she was preceded in death by a great grandson, Christopher Lee Thomas. A funeral service will be conducted at 11 a.m. on Monday, April 21, 2014, in the Henry Funeral Home Chapel by the Rev. Rader M. Ogden, Jr. Burial will follow in Oak Lawn Mausoleum and Memory Gardens. The family will receive friends from 6 until 8 p.m. Sunday, April 20, 2014, in the funeral home and other times at the residence.

The family of NANCEY KATHLEEN SHOVER created this Life Tributes page to make it easy to share your memories.

Send flowers to the SHOVER family.