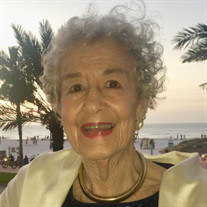 Nancy Elizabeth (Via) Summers, 85, of Wilmington, North Carolina, and formerly of Staunton, Virginia, died Thursday, March 5, 2020, at Lower Cape Fear Hospice and LifeCare Center surrounded by her family. She was the widow of Francis Lee “Frank” Summers, Jr. She was born March 6, 1934, in Delaware, Ohio, daughter of the late Fred and Lucille (Smith) Via. Nancy graduated with an Education degree from the University of Miami, Coral Gables, Florida, in 1956. While there, she was a member of Delta Gamma sorority and was the Sweetheart of Sigma Chi fraternity. She taught school for nearly 25 years, most notably as the founder and director of Covenant Presbyterian Church Early Childhood Developmental School in Staunton. Nancy loved her God, her country and her family. She was active in three Staunton churches across more than 50 years focusing on children’s music and Christian education. She was an outspoken believer in Christ and was always involved in a Bible study to take her spiritual life deeper. Nancy lived an adventurous and spontaneous life, keeping her family very active and teaching them how to live life to its fullest. In mid-life, she and her husband Frank lived part-time at Round Hill Farm near Goshen, Virginia, where Nancy enjoyed gardening and roaming the fields on her four-wheeler. She hosted her grandchildren every summer at the farm teaching them how to love and respect God’s creation. Many other friends and family members also enjoyed Nancy’s hospitality at the farm. Family members include two sons, Lee Summers and wife Janie (Brown) Summers of Virginia Beach, Virginia, and Tim Summers and wife Jennifer (Harris) Summers of Hickory, North Carolina; a daughter, Susan (Summers) Andrews and husband Tony Andrews of Surf City, North Carolina; and five grandchildren: Will Summers, Tyler Summers, Chip Summers and wife Kathleen (McSwain) Summers, Kate Summers, and Lucy Andrews. In addition to her husband, she was preceded in death by her brother, William Frederick Via, Jr. A Celebration of Life service will be conducted at 4 p.m. on Saturday, March 14, 2020, at Memorial Baptist Church, Staunton, Virginia, by Pastor Bill Smith. Burial in Thornrose Cemetery will be private. The family will receive friends at the church following the service. Memorial gifts can be made to Covenant Presbyterian Church Child Development Center, Nancy Summers Scholarship Fund, 2001 N. Coalter St, Staunton, VA 24401; Lower Cape Fear LifeCare, 1414 Physicians Drive, Wilmington, NC 28401; Equipping the Saints, 1254 Keezletown Road, Weyers Cave, VA 24486. Henry Funeral Home is handling the arrangements.

Nancy Elizabeth (Via) Summers, 85, of Wilmington, North Carolina, and formerly of Staunton, Virginia, died Thursday, March 5, 2020, at Lower Cape Fear Hospice and LifeCare Center surrounded by her family. She was the widow of Francis Lee &#8220;Frank&#8221;... View Obituary & Service Information

The family of Nancy V. Summers created this Life Tributes page to make it easy to share your memories.

Send flowers to the Summers family.