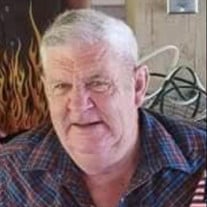 GREENVILLE - Nickolas Edward Ryder, Sr., 79, husband of Carol S. Ryder, beloved father, grandfather and great grandfather, passed away on the 25th of September at Augusta Health. Mr. Ryder was born in Williamsville, VA in 1941 to the late William Ellis Ryder and Hazel Ryder McCune. He was raised by his aunt and uncle Maynard Lee Ryder and Blanche Ryder. Before retirement, Mr. Ryder drove a tractor trailer. Mr. Ryder served in the United States as a Specialist 4th Class (SP4) from December 1963 to December 1967. While stationed in France, he was a truck driver. His last duty, he was stationed at Fort Riley, Kansas, where he was a MP. In addition to his parents, he is preceded in death by two sisters, Fanny Bowers and Jane Kelley; a brother, Nelson Ryder; a brother-in-law, Russel Eckard; a stepdaughter, Sheila Christian; a step grandson, Chris Taylor; and a good friend, Dewey Marshall. In addition to his wife, he is survived by two daughters, Lisa R. Wells and husband Gerald and Teresa R. Vanessa and husband Baines; two sons, Nickolas E. Ryder, Jr. and Mike A. Ryder. He is also survived by nine grandchildren and eleven great grandchildren; three stepsons, Wayne Taylor, Dennis Taylor and wife Vickie, and Stanley Taylor; a stepdaughter, Vanessa Cropp; ten step grandchildren; and thirteen step great grandchildren; a sister, Joyce R. Eckard; two brothers, James Ryder and wife Bonnie, and Clayton Ryder; and a stepbrother, Willie McCune. A Celebration of Life will be held at 1 p.m., Saturday, October 23, 2021, at 1647 Stover School Road, Greenville, VA. The family asks everyone to bring a covered dish and chair due to being outside. The family would like to thank the nurses and doctors in the ICU unit for all they did during his stay at the hospital.

The family of Nickolas E. Ryder Sr created this Life Tributes page to make it easy to share your memories.

Send flowers to the Ryder family.