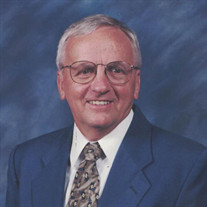 God’s servant, Pastor Marshall William Braylo, 80, husband of Reba (Phipps) Braylo, of Staunton, entered heaven Thursday, March 18, 2021. He was born August 10, 1940 in Winchester, a son of the late William and Lena (Frye) Braylo. Marshall was employed for 20 years by Western State Hospital in the recreation department before being called into ministry. He was Pastor of Jeffersonton Baptist Church for 25 years. He also served as the interim pastor at several area churches. In addition to his wife of 54 years whom he married on November 19, 1966, family members include two sons, David Lee Braylo and Darren Matthew Braylo; a daughter, Ann Marshall Braylo; a sister, Marjorie Camden; and a number of nieces and nephews. He was preceded in death by a son, Douglas Alan Braylo, and four siblings. A Celebration of Life will be conducted at 3 p.m. on Monday, March 22, 2021 at Calvary Baptist Church by Pastor Stewart McCarter, Pastor Bobby Campbell, Dr. Dallas Smith, and Pastor George Yoder. The family will receive friends from 12 until 3 p.m. on Monday, March 22, 2021 prior to the service in the church. A graveside service will be conducted at 1:00 p.m. on Tuesday, March 23, 2021 at Shiloh United Methodist Church Cemetery in Sparta, NC. Memorials may be made to The Gideons International Processing Center, P.O. Box 97251, Washington, DC 20090-7251 or the American Cancer Society, P.O. Box 4110, Glen Allen, VA 23058. Arrangements entrusted to Henry Funeral Home, Staunton.

The family of Pastor Marshall W. Braylo created this Life Tributes page to make it easy to share your memories.

Send flowers to the Braylo family.