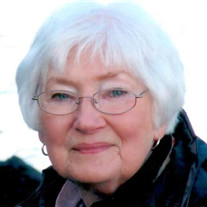 Patricia E. Loughran Cabe, 85, died May 8, 2021 at her home in Verona, Virginia with her beloved husband Tom at her side. Diagnosed with a terminal illness in 2017, she chose to live life with zest and grace, finding joy and sharing love every day. Pat was born on the first day of summer in 1935 in Baton Rouge, Louisiana, the only daughter of George and Edna Marie Songe Loughran. Her mother was from Houma in Terrebonne Parish, and Pat was proud of her Cajun heritage. She graduated from Louisiana State University in Baton Rouge and held a degree in Business Administration. On September 14, 1957, she married Tom Cabe, and together they built a remarkably full and rewarding life. After their marriage in 1957, they lived in Northern Virginia until 1960 when they moved to the Shenandoah Valley. They raised their four children in Waynesboro and later moved to Staunton and then Verona. In Staunton, they meticulously restored the Merrillat House and gardens, for which they received the 1993 Historic Staunton Preservation Award. For 25 years, she worked with Tom in the operation of the business they founded, the Bradford Company, assuming management of the company after his retirement. She retired in 2002. Pat always felt fortunate in the life she was able to lead, and considered herself rich in family, friends, four-footed friends, and opportunities to enjoy, participate in, and support theater, music, and art. She was an active Oak Grove Player for 57 years, appearing in her first role there in 1963. She also acted with the Waynesboro Players, Theater Wagon, and ShenanArts. She was a member of the Theater Wagon Board of Directors and served as its president for 10 years. With her husband, she was a founding member of the American Shakespeare Center’s Blackfriars Playhouse in Staunton. Her appreciation for the beauty of the Shenandoah Valley, where she lived most of her life, never waned. From her first visit to the rugged coast of Down East Maine she felt a deep connection to that landscape as well, and returned over and over again through the years; for more than 25 years she and Tom spent each fall in Machiasport where they had many dear friends. With adventurous spirit they traveled extensively, especially enjoying Paris as well as wild, ancient, and out-of-the-way places in Europe and North America. Pat was an exceptional cook who hosted legendary dinners with family and friends. She loved flowers and had a gift for arranging them elegantly. She is survived by her husband of more than 63 years, Thomas Reid Cabe; by her four children and their spouses, Linda Cabe Halpern and Richard Halpern, Crista Cabe and Gary Lancaster, Paul Cabe and Leigh Anne Beavers, and Bradford and Carolyn Cabe; by 15 much beloved grandchildren; and by her dear daily companion, the black Labrador Retriever Abbey. A funeral mass will be held at 12 noon on Thursday, May 13, at St. Francis of Assisi Catholic Church in Staunton. Participants are asked to wear masks. Henry Funeral Home is handling arrangements. Condolences may be sent to the family at www.henryfuneralhome.net.

Patricia E. Loughran Cabe, 85, died May 8, 2021 at her home in Verona, Virginia with her beloved husband Tom at her side. Diagnosed with a terminal illness in 2017, she chose to live life with zest and grace, finding joy and sharing love every... View Obituary & Service Information

The family of PATRICIA E. CABE created this Life Tributes page to make it easy to share your memories.

Send flowers to the CABE family.