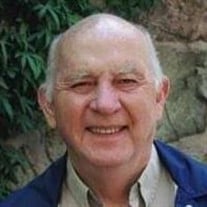 Phillip Elwood Grasty, 89, husband of Mary Grasty of Waynesboro, went to his final resting place Tuesday, December 10, 2019. He was born February 19, 1930, in Lynchburg, a son of the late Reavis Bryan and Florence Elizabeth (Childress) Grasty. Mr. Grasty was a veteran of the U.S. Army. Prior to retirement, he was the Founder of Blue Ridge Area Food Bank, where he served as Executive Director for 28 years. He also served on the Board of Directors for WNLR. He was a member of Cornerstone Church of Augusta. He was preceded in death by his first wife, Audrey (Campbell) Grasty; three brothers, Reavis Grasty, Jr., Charles Grasty, and Douglas Grasty; and two sisters, Florence Moran and Alice Arbogast. In addition to his wife, family members include three daughters and sons-in-law, Lisa and Wray Brubeck of Staunton, Heidi and Steve Emore of Lexington, and Lori and Ricky Hall of Staunton; step-children, Mark, Peter, Timmy, and Danny Davis, and Beth Davis Wine; grandchildren, Jeremy Burroughs, April Parrish, J. T. Thompson, Gracia Hall, Jessica Hall, Sarah Wine, Noah Wine, and Micah Wine; and numerous great grandchildren. A funeral service will be conducted at 11 a.m. Saturday, December 14, 2019, at Cornerstone Church of Augusta by Pastor Brad Hanna. Burial will follow in Augusta Memorial Park. Active pallbearers will be his grandsons and his sons-in-law. Honorary pallbearers will be the men of the church. The family will receive friends from 6:00 until 8:00 p.m. on Friday evening in the Henry Funeral Home and also after 1 p.m. on Saturday at his residence, 236 Loudoun Avenue, Waynesboro. Condolences may be sent to the family at www.henryfuneralhome.net. In lieu of flowers, memorials may be made to the Blue Ridge Area Food Bank, 96 Laurel Hill Road, Verona, VA 24482 or to WNLR, New Life Ministries, P. O. Box 400, Churchville, VA 24421.

The family of Phillip E. Grasty created this Life Tributes page to make it easy to share your memories.

Send flowers to the Grasty family.