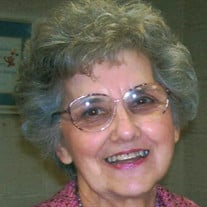 Phyllis Odell Blackwell Rankin, 93, of Staunton, VA, formerly of The Legacy at N. Augusta died Wednesday, November 6, 2019, at Kings Daughters Community Health and Rehab. The third of seven children born to the late Robert Earl and the late Beulah Lee (Lilley) Blackwell Plummer, Phyllis came into this world on October 30, 1926, in Rockbridge Baths, VA. A tenant farmer’s daughter, she spent her formative years helping on the farm while caring for younger siblings (“more fun than farm work”), most notably little sister, Doris Blackwell Lunsford. Summer breaks were busy with cooking, cleaning and childcare for other families in Rockbridge County and North Carolina. An excellent seamstress, Phyllis learned to sew as a child and often designed her own clothes, resourcefully making patterns from brown paper bags and using material from flour sacks. Sundays were a time of Christian worship with family at New Providence Presbyterian Church in Brownsburg, VA and later at Bethesda Presbyterian, where she, her mother, brothers and sisters shared their musical gifts of singing and playing piano by ear, while their father, an elder, taught from the Bible. Eager to learn and a diligent student, Phyllis found great joy in attending school, playing girl’s basketball and excelling in academics to earn the rank of Valedictorian for the Brownsburg High School Class of 1944. That same year, she was awarded the Good Citizenship Certificate by The National Society of the DAR for demonstrating the qualities of dependability, leadership, service and patriotism to an outstanding degree during the entire course of her senior year. Upon graduating, she moved to Langley Air Force Base in Phoebus, VA. Living with sister and brother-in-law, Kate and serviceman Bill Hullett, she contributed to the war effort by working in the Main P.X. at Fort Monroe. Possessing an incredible retention for song lyrics, Phyllis was popular among the soldiers for singing (per request) the latest Top 40 hits while working the soda fountain and rationing tobacco distribution. After her time at Fort Monroe, she returned to Lexington, VA and began training as a nurse at Stonewall Jackson Hospital. Once, she delivered a baby by herself before the doctor could arrive. In 1947, representing Schewel’s Furniture Store, Phyllis won the title of runner up in the Miss Lexington beauty pageant. Deciding to pursue secretarial and administrative work, she moved to Staunton, VA to attend Dunsmore Business College, where she met accounting teacher and WWII veteran, Robert Franklin Rankin II. Just two years her senior, yet not wanting to show a hint of impropriety or rumor of teacher’s pet, she insisted R. Frank bring textbooks and turn his frequent invitations for a date into accounting tutorials. He willingly obliged and before long they were married at Central United Methodist Church in Staunton on September 4, 1949. After getting married, Phyllis worked as (the only) office secretary at Robert E. Lee High School until giving birth to her first son in 1952. Motherhood was her deepest desire and she devoted herself fully to raising four children: Robert Franklin III, Richard Allen, Jane Lee and Julie Dunn. She was a prudent homemaker, wise with a budget and often used her sewing talents to clothe her household. Not until her youngest attended college did Phyllis return to work outside the home. For nine years, she was employed as clerk and inventory receiver at The Fashion Gallery in Verona, VA. Phyllis’ love for music continued throughout her life and she sang soprano for over forty years in the choir at St. John’s United Methodist Church, of which she and husband Frank were charter members. In the 1970’s, she took her first formal piano and organ lessons from good friend and St. John’s organist, Joyce Hammer. Other lifelong passions were bird watching and a love of naturalistic gardening around the family home built in 1955 at 494 Mountain View Drive, affectionately known as “Rankin’s Rocky Ridge.” Always a member of the “look it up club,” Phyllis never tired of learning. With a special interest in American history and politics, she was an avid reader and stayed abreast current world and national events by reading the newspaper, listening to talk radio and watching C-SPAN and FOX News. Mentally sharp until her death, she exercised her mind with crossword puzzles and fed her spirit with daily Bible reading and devotions by Dr. Charles Stanley. Shortly before her death, she completed a “Bible in One Year” reading curriculum in attempt to “study for her finals.” Her beautiful, warm smile, love of family, sense of humor and forthright opinions will be greatly missed now that Phyllis Odell Blackwell Rankin has graduated to her Heavenly Home. In addition to her parents, she was preceded in death by husband R. Frank Rankin, sons Robert and Richard Rankin, brothers Elmer, Kenneth, and Stephen Blackwell, sisters Gladys B. Brown, Kate B. Hullett and special cousin Bobby Britt. Phyllis is survived by sister Doris B. (Walter) Lunsford of Brownsburg, VA, and two daughters and sons-in-law, Jane C. (Lloyd) Smith of Waynesboro, VA and Julie R. (Donald S. II) Reid of Staunton, VA. Beloved grandchildren are Aaron Coffey of Louisville, KY, David Graham (Courtney) Rankin of Murrieta, CA, Tyler Smith of Waynesboro, VA, Jamie Rankin of Fort Collins, CO, and Sela and Adra Reid, both of Staunton. Great-grandchildren are Scout Coffey of Louisville, KY and Remington and Rowyn Rankin of Murrieta, CA. Burial will be private in Thornrose Cemetery, followed by a memorial service conducted at 11:00 a.m. on Monday, November 11, 2019, in St. John’s United Methodist Church by the Rev. Chuck Cole. The family will receive friends in the church social hall following the service. Memorial contributions may be made to St. John’s United Methodist Church, 1716 N. Augusta Street, Staunton, VA 24401 and Special Olympics, 3212 Skipwith Road, Suite 100, Richmond, VA 23294-4413. The family would like to express their heartfelt gratitude for the loving, compassionate care Phyllis received from Dr. Christopher Heck, the Eclipse staff of Kings Daughters Community Care and Rehab and Legacy Hospice. Henry Funeral Home is handling the arrangements.

The family of Phyllis Odell Blackwell Rankin created this Life Tributes page to make it easy to share your memories.

Send flowers to the Rankin family.