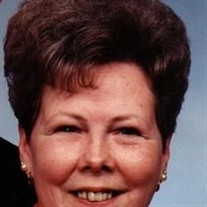 REBECCA B. STRICKLER STAUNTON, VA.... Rebecca (Baber) "Becky" Strickler, 73, widow of Charles Edward Strickler, of Staunton, died Friday, October 14, 2011 in Rockingham Memorial Hospital. She was born July 2, 1938 in Augusta County, a daughter of the late Curtis Burton and Lorene (Hogan) Baber. Prior to retirement she had been employed by King's Daughters Hospital and C.F.W. Telephone Company. She was a member of West Augusta United Methodist Church. She was preceded in death by her husband of 43 years on August 1, 2001. Family members include a daughter and son-in-law, Lynn S. and Ronald L. Trobaugh of Harrisonburg; a brother, Curtis Burgess Baber of Augusta, GA; a sister, Brenda Hope Shuey of Verona; and a grandson, Clark Edward Trobaugh. A Memorial Service will be conducted at 6 p.m. Monday, October 17, 2011 in the Henry Funeral Home Chapel (www.henryfuneralhome.net) by Rev. Deborah Washer. The family will receive friends following the service. In lieu of flowers, memorials may be made to H.O.P.E. Cancer Center, 78 Medical Center Drive, Fishersville, VA 22939 or to the Staunton-Augusta Rescue Squad, 1601 North Coalter Street, Staunton, VA 24401.

The family of REBECCA BABER STRICKLER created this Life Tributes page to make it easy to share your memories.

Send flowers to the STRICKLER family.