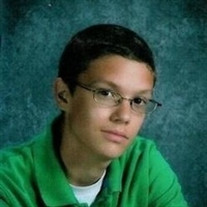 RICHARD L. FIREBAUGH STAUNTON, VA Richard Lyonel Firebaugh, 20, of 107 Sproul Lane, died Wednesday, March 28, 2012, in Staunton. He was born February 28, 1992, in Harrisonburg, a son of Gary and Lynell Firebaugh. Mr. Firebaughs love in life was film editing, cooking, and spending time with his many friends. He attended R. E. Lee High School, where he lettered in tennis. While in high school, he received a certificate from New York Film Academy for film production at MGM Studios at Disney World in Orlando, FL. After high school he received certifications in Film Editing from New York Film Academy in NYC and Genius Studios, Orlando, FL. In addition to his parents, family members include three sisters and two brothers-in-law, Aimee D. Firebaugh and her friend, Cameron Frost, of Staunton, Merrie and Joe Burruss, and Jaime and Clarence Payne, all of Harrisonburg; paternal grandfather, Richard C. "Dick" Firebaugh of Staunton; the love of his life, Jazmine Skye Bryant; nieces and nephews, Zeke, Tyler, Sydney, Brittany, Tony, Emily, Chloe; an aunt, Debbey Roadcap and her husband, Dave Proctor; and a cousin, Kim Guyer and her husband, Rodney, and their children, Mason and Clay, all of Harrisonburg. He was preceded in death by his paternal grandmother, Kathryn R. Firebaugh; and maternal grandparents, Lyonel and Mary Grizzard. A funeral service will be conducted at 2 p.m. Monday, April 2, 2012, in the Henry Funeral Home Chapel by the Rev. Robert D. McCarty. Burial will follow in Thornrose Cemetery. The family will receive friends from 1 p.m. until 2 p.m. prior to the service in the funeral home and any time at their residence, 107 Sproul Lane, Staunton. Memorials may be made to the Verona Community Food Pantry, P.O. Box 47, Verona, VA 24482.

The family of RICHARD LYONEL FIREBAUGH created this Life Tributes page to make it easy to share your memories.

Send flowers to the FIREBAUGH family.