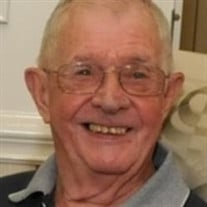 ROBERT C. BEAM, JR. STAUNTON, VA Robert Chambers Beam, Jr., former resident of Stokesville and currently residing at Emeritus, died April 7, 2014, at Augusta Health. He was born June 7, 1922, at home in Augusta County, the eldest child of Robert C. and Mae Vernon (Brower) Beam. Mr. Beam attended Staunton City Schools and graduated from Augusta Military Academy in 1940. He then joined the Army Air Corps, and served as a B-25 instructor pilot during World War II. Upon his father's sudden death in 1944, Bobby returned to Staunton to run the family's business, Staunton Steam Laundry. In 1950 he married Betty Lee Reid, and they were married for 53 years until her death in 2003. Mr. Beam served as President of Staunton Steam Laundry for many years, and did not fully retire until 2012, the year the company celebrated its 100th anniversary. During his career he grew the company through acquisitions and by expanding the company's services and territory. His children all began working for him during their teenage years, and the company is now owned and operated by them. The Beam's enjoyed spending time at their "camp", Beam's Pine Lodge in the George Washington National Forest. Bobby loved being surrounded by the beauty and nature of the forest, and could often be found on his favorite John Deere tractor. Mr. Beam was a member of the Staunton Exchange Club, served as Chairman of the Staunton School Board, member of the Advisory Board of First and Merchants Bank, President of the Tri-State Launderer's Association, Director of the International Fabricare Institute, and was a former board member for the North River Telephone Cooperative and the Bridgewater Rescue Squad. He was a lifelong member of Trinity Episcopal Church. He is survived by his son and daughter-in law, Thomas R. and Diana K. Beam; his daughter Lee A. Beam; his daughter and son-in law, Rebecca C. and Thomas J. Anhold; three grandchildren, Emily A. Beam and Christopher J. and Steven B. Anhold; his sister Helen B. Ambler, his sister-in-law Betty Gay Beam, his brother-in-law and sister-in law, Nelson K. and June F. Reid, and a number of nieces and nephews. In addition to his wife and parents, he was predeceased by his brothers George A. Beam and Warren E. Beam. The family would like to thank Dr. Jim LaGrua and the staff at Carilion Fort Defiance Family Medicine for the excellent care they provided to Bobby; the staff at Emeritus Memory Care; Dr. Barrett and staff at Augusta Health; and the staff with Augusta Hospice. A special thank you to his long-term caregivers Burnice Brown, Kathy Sweet and former caregiver Bernice Bowers. A memorial service will be conducted at 3:00 PM on Thursday, April 10 at Trinity Episcopal Church, Staunton, by the Rev. Dr. Paul Nancarrow. A private burial will be held at Thornrose Cemetery. Active pallbearers will be the Honorable W. Chapman Goodwin, H. C. Stuart Cochran, Bruce R. Gill, L. Eddie Haley, Ronald L. Howdyshell, Robert E. Loyd, Mark E. Nuckols, and John W. Withers. Honorary pallbearers will be current and former employees of Staunton Steam Laundry. The family will receive friends from 6 until 8 PM Wednesday April 9, 2014, at Henry Funeral Home, Staunton. In lieu of flowers, memorial contributions may be made to Trinity Episcopal Church, PO Box 208, Staunton, VA 24402; the Mt. Solon Fire and Rescue Squad Fund Drive, 86 Emmanuel Church Road, Mt. Solon, VA 22843; or the Augusta Military Academy Alumni Foundation, P O Box 100, Fort Defiance, VA 24437. Staunton Steam Laundry and all Shipplett Cleaners locations will close at 2:00 PM on Thursday April 10 and reopen at their regular time on Friday morning.

The family of ROBERT CHAMBERS BEAM, JR. created this Life Tributes page to make it easy to share your memories.

Send flowers to the BEAM, family.