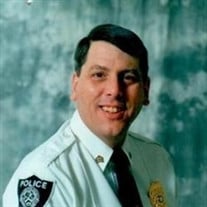 ROBERT E. DICK VERONA, VA Robert Edward "Eddie" Dick, 58, husband of Grace (Spiggle) Dick, of 79 Mill Stone Drive, died Monday, January 6, 2014, in the University of Virginia Medical Center, Charlottesville. He was born October 11, 1955, in Huntington, West Virginia, a son of the late Robert Earl and Jacqueline (Dawson) Dick. Eddie always provided for his family and put them first. He was a Sergeant with the Staunton Police Department, serving for 32 years. All his life he worked part-time at various grocery stores. He loved scouting and achieved their highest honor. He enjoyed hunting, going to camp, and cooking and baking for his family. He lived a life to make other people smile, and will be missed. In addition to his wife, whom he wed March 14, 1992, family members include four children, Michael, Angelique, Gabe, and Christy and husband, Scott; and three grandchildren, Jasmine, Miakota, and Joseph. He was preceded in death by a brother, William David Dick Harrison. A memorial service will be conducted at 11 a.m. on Friday, January 10, 2014, in Verona United Methodist Church by the Rev. Robert J. Weeks and Chaplain Greg Czerniak. To celebrate Eddie's life the family will be wearing colorful clothing and ask you do the same.

The family of ROBERT EDWARD DICK created this Life Tributes page to make it easy to share your memories.

Send flowers to the DICK family.