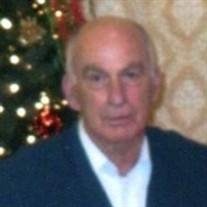 ROBERT L. SWEET STAUNTON, VA Robert Linwood "Bob" Sweet, 78, of Staunton passed away Tuesday, July 31, 2012, at Augusta Medical Center, Fishersville. He was born August 10, 1933, in Augusta County a son of the late Jesse and Daisy (Stogdale) Sweet. Bob served in the US Air Force and following an honorable discharge worked at Standard Tile Company from 1951 and later became president and owner until his retirement. He was a member of Elk Run Church of the Brethren in Churchville. He was a member of Stonewall Rifle and Pistol Club. Bob is survived by his estranged wife, Dorothy (Gilmer) Sweet of Churchville and a brother, Glenn R. Sweet and his wife, Nell of Charlottesville. Also surviving are three sons and daughters-in-law, Donald Ray and Donna Sweet of Staunton, James W. and Sherry Sweet of Keezletown, and Kenneth John and Robin Sweet of Winchester; six grandchildren; two great grandchildren; and a number of nieces and nephews. Bob is also survived by a very dear and special companion, Carol Blackwell, and her children, Tony Wolfe, Junior and Ashley Blackwell, whom he treated as if they were his own. He was preceded in death by two half-sisters. Bob was an avid reader and hunter, and loved to work on just about anything that was gasoline powered or mechanical. He had a large network of friends and acquaintances and will be sadly missed by all who knew him. A funeral service will be conducted at 2 p.m. Friday, August 3, 2012, at Elk Run Church of the Brethren by Pastor Pete Leddy. Burial will follow in the Church Cemetery. Active pallbearers will be Aaron Sweet, Brandon Sweet, Jonathan Sweet, Junior Blackwell, Garland Wimer, and Jay Rexrode. Honorary pallbearers will be Dana Sweet, Cierra Sweet, Sharon Sweet, Ashley Blackwell, and friends attending the service. The family will receive friends from 6 until 8 p.m. Thursday, August 2, 2012, in the Henry Funeral Home. Memorials may be made to Elk Run Church of the Brethren, Memorial Fund, 1599 Scenic Highway, Churchville, VA 24421 or to S.P.C.A., P.O. Box 2014, Staunton, VA 24402.

The family of ROBERT LINWOOD SWEET created this Life Tributes page to make it easy to share your memories.

Send flowers to the SWEET family.