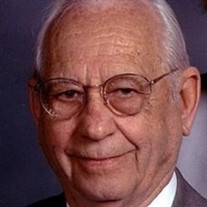 ROLLO B HOUFF STAUNTON, VA Rollo B Houff, 93, of Staunton, died Monday, November 14, 2011 at his residence. He was born February 14, 1918 to the late Elbert Casper and Bessie Pearl Meyerhoeffer Houff in Fauquier County, Virginia. He was a graduate of Beverley Manor High School class of 1936 and received his business education at Dunsmore Business College. During World War II he was a member of the army infantry and served with distinction at both Fort Meade and Camp Pickett. For 32 years Mr. Houff owned and operated houff's Grocery in Staunton, where in cooperation with the Distributive Education programs in the local high schools, he provided students with a work experience. Through his business he also supported the Staunton Kiwanis Club Little League baseball program. Mr. Houff was an active and devoted member of St. Paul's United Methodist Church in Staunton. He served as lay leader for more than 30 years. He was a member of the Chancel Choir for 50 years, served as Sunday school treasurer, was an officer of the Men's Brotherhood and served on numerous committees. For 8 years he served on the Virginia Annual Conference Commission on Religion and Race. After a number of years as treasurer of the Staunton/West Augusta American Cancer Society, he was made an Honorary Life member of the Board of Directors and in 1990 he was honored with a Volunteer of the Year Award. After his retirement he continued to be an avid golfer and enjoyed growing orchids in his greenhouse at his home. Mr. Houff was a kind and gentle man. He will be remembered by his family as a loving husband, father, grandfather, and great-grandfather. In addition to his parents, he was preceded in death by his wife of 71 years, Shirley (Bell) Houff and by a granddaughter, Kathleen Ludwig. He is survived by two sons Buzz Houff and wife, Suzanne of Fredericksburg and Mike Houff and wife Joy, of Staunton; two daughters, Donna Houff Ludwig and husband, David of Fort Defiance and Linda Houff of Ft. Defiance; six grandchildren, Jackie Ware and husband, Chris, of Arlington, Michael Petty and wife, Teresa, of Aylett, Jennifer Bryson of Glenelg, MD, Christine Sidilau and husband, Jonathan, of Sterling, Megan Crew and husband, Ben, of Salem and Cassie Gochenaur and husband, A.J., of Nashville, TN; step grandson, Don Purkall, of Richmond; eight great-grandchildren, Katelyn and Levi Petty, Katharine and Cameron Ware, Abby Ludwig, Bryce and Anne Morgan Crew, and Ander Sidilau. A celebration of his life will be held at 11 a.m. Friday, November 18, 2011 in St. Paul's United Methodist Church in Staunton by the Rev. G. Jeffrey Allen and Dr. J. Paul Rowe. Burial will follow in Thornrose Cemetery. Active pallbearers will be Wayne Anderson, Lee Brooks, Joe Cox, Fee Detamore, John Dillon, Ken Kyle, Richard Powell, Bill Rusmisel, and Chuck Trippel. Honorary pallbearers will be member of the St. Paul's Sunshine Group, the Golden Deeds Bible class and the Men's Brotherhood. The family will receive friends from 6 until 8 p.m. Thursday, November 17, 2011 at St. Pauls United Methodist Church, 2000 Shutterlee Mill Road, Staunton. Memorial contributions may be made to the building fund at St. Paul's United Methodist Church, 2000 Shutterlee Mill Road, Staunton, VA 24401.

ROLLO B HOUFF STAUNTON, VA Rollo B Houff, 93, of Staunton, died Monday, November 14, 2011 at his residence. He was born February 14, 1918 to the late Elbert Casper and Bessie Pearl Meyerhoeffer Houff in Fauquier County, Virginia. He was a graduate... View Obituary & Service Information

The family of ROLLO B HOUFF created this Life Tributes page to make it easy to share your memories.

Send flowers to the HOUFF family.