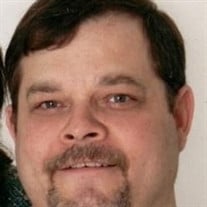 RONALD E. "GENE" SPICER STAUNTON, VA Ronald Eugene "Gene" Spicer, 54, husband of Elizabeth Packer Spicer, of East Gay Street, Staunton, passed away unexpectedly on Sunday, July 7, 2013 at his residence. He was born on May 29, 1959 in Karney, NJ, a son of Nellie G. Spicer Howdyshell and the late Warren B. Spicer. Mr. Spicer graduated from Fort Defiance High School where he played football. He trained in culinary arts while serving in the Marines. He was the former owner of Gene's Family Fun Center in Staunton and was the current owner of Sam's Hot Dogs in Harrisonburg. He was well known in the community, ready to lend a helping hand to anyone in need, and had a spirit larger than life. He was an avid Redskins Fan and never missed a game. He was a former member of the Salvation Army Church of Staunton. In addition to his wife and mother, family members include a step-son, Danny Packer and his wife, Cindy, of Fishersville; a brother and sister-in-law, Bruce R. and Rosemary Spicer of Staunton; a sister and brother-in-law, Priscilla Spicer Sheffer and husband, Curtis, of Fort Defiance; two grandchildren, Jacob Hall and Grace Packer; a great grandchild, Sophia Hall; a nephew, Curtis Lee Sheffer; special friend, Roger Coffey; two canine babies, Bernie and Sophie; and numerous nieces, nephews, aunts, and uncles. He was also preceded in death by a son, Chris Taylor; a brother, Warren B. Spicer, Jr.; his step-father, Elmer L. Howdyshell; and special friend, Harry Powers. A memorial service will be conducted at 2 p.m. Thursday, July 11, 2013, in the Henry Funeral Home Chapel by the Rev. Frank Hall. The family will receive friends one hour prior to the service in the funeral home.

The family of RONALD EUGENE SPICER created this Life Tributes page to make it easy to share your memories.

Send flowers to the SPICER family.