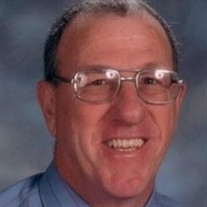 RONALD G. WILKERSON STAUNTON, VA Ronald Gene Wilkerson, 68, husband of Julia (Tutwiler) Wilkerson of Staunton died Thursday, August 16, 2012, at Augusta Health, Fishersville. He was born December 12, 1943, a son of the late Anthony Perkins, Sr., and Oval (Robertson) Wilkerson. He graduated from Robert E. Lee High School in 1962, received his B.A. degree in 1966 and his Master's in Education in 1970, both from the University of Virginia. Mr. Wilkerson was a math teacher and coach at Riverheads High School for 42 years until retiring in July 2007 due to declining health. He coached varsity boys track, cross country, and J.V. and Varsity football. He received a Red Pride Hall of Fame award in September 2006, and was named the RHS Teacher of the Year in 2004-2005. He received the Doug Carter Community Hall of Fame Award in 2010, and was named the Sectional Boys Track Coach of the year in 2007. The Hull-Wilkerson Track at Riverheads High School was named in 2011. He was a member of the Staunton Church of the Brethren. In addition to his wife, whom he married on June 12, 1971, family members include a son, Michael Wilkerson of Fishersville; a daughter and son-in-law, Laura Wilkerson and Wyatt Shifflett of Waynesboro; three grandchildren, Calleigh Shannon Wilkerson, Ava Julianna Shifflett, and Seth Isaac Shifflett; six brothers and five sisters-in-law, Anthony Wilkerson, Jr., Carl and Nancy Wilkerson, Frank and Pluma Wilkerson, Burnett and Charlotte Wilkerson, Paul Wilkerson, Fred and Frances Wilkerson, and Catherine Wilkerson; three sisters and a brother-in-law, Helen Kniceley, Ann Calverley, and Judy and Ed Zdinak; and numerous nieces and nephews. He was preceded in death by a brother, Warren Wilkerson; and two sisters, Evelyn Gibson and Frances Sutton. A funeral service will be conducted at 11 a.m. Tuesday, August 21, 2012, in the Staunton Church of the Brethren by the Rev. Scott L. Duffey. Burial will follow in Thornrose Cemetery. Active pallbearars will be Larry Hull, Al Costa, Bryan Quick, Frank Swisher, Wayne Bradley, Steve Kyle, Dr. H. Lynn Moore, and Wyatt Shifflett. Honorary pallbearers will be the poker boys, members of the 1962 Robert E. Lee High School class, and his golfing buddies. The family will receive friends from 6 until 8 p.m. Monday, August 20, 2012, in the Henry Funeral Home. Memorials may be made to the Staunton Church of the Brethren, 1615 North Coalter Street, Staunton, VA 24401 or to the Track Department of Riverheads High School, in c/o Matt Stevens, 19 Howardsville Road, Staunton, VA 24401. A special thanks to Dr. H. Lynn Moore and his family.

The family of RONALD GENE WILKERSON created this Life Tributes page to make it easy to share your memories.

Send flowers to the WILKERSON family.