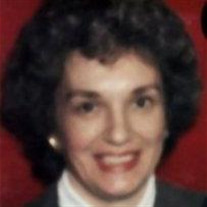 Rachel (McClain) Wright, 80, widow of Carl Pearson Wright, of Staunton died Saturday, November 9, 2019, at her residence. She was born February 15, 1939, in Martinsburg, West Virginia, a daughter of the late Russell Kenneth and Faith McClain. Mrs. Wright retired from Bridgewater United Methodist Church as a secretary. Prior to that she spent many years as a stay at home mother and homemaker and she worked in the newspaper and book printing industry. In addition to her husband, she was also preceded in death by a grandson, Frank McClain Wright II; a step-son, Steve Wright; and her brother and sister, Edward McClain and Mariwyn Smith. Family members include two sons and daughter-in-law, Jonathan and Fara Wright of Staunton and Frank and Vickie Wright of Orange Park, FL; a step-son, Carl Wright of Florida; five grandchildren, Owen Wright, Scarlett Wright, Jeremy Wright, Jenny Jensen, and Amanda Estrada; and four great grandchildren, Ryland and Roxie Wright, Ethan Jensen, and Arianna Estrada. A memorial service will be conducted at 12 noon on Saturday, November 23, 2019, in the Henry Funeral Home Chapel by the Rev. Russell Heinrich.

The family of Rachel M. Wright created this Life Tributes page to make it easy to share your memories.

Send flowers to the Wright family.