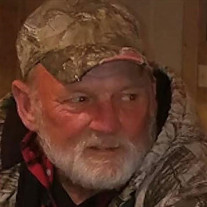 Randy Lee Campbell, 60, husband of Teresa “Tessie” Kay (Robertson) Campbell, of Staunton, died Wednesday, November 13, 2019 at his residence. He was born November 17, 1958 in Staunton, a son of Glenda “Mickey” (Reed) Campbell and the late Bobbie Lee Campbell. Randy was employed by Swann Construction with 27 years of service as a welder. Randy loved hunting and fishing with his buddies, enjoyed Civil War history, and was a member of the Staunton Moose. In addition to his wife, family members include a son, Jeremy Cupp and wife, Lindsay, of Weyers Cave; a daughter, Jessica Jackson of Delaware; a step-son, Howard Desper and wife, Kristen, of Waynesboro; a brother, Kim Wade of Richmond; a niece, Candice Pruiksma of Crimora; five grandchildren; an aunt, Carol Burdette of Staunton; an uncle, Harry Reed, Jr. of Churchville; and special friends, Mike and Vicki Stone, James Koogler, Timmy Mitchell, George Kennedy, Rusty Sprouse, Bill and Amylyn Burke, and Billy Stone. He was preceded in death by a brother, Bruce Campbell; his grandparents; two aunts; and four uncles. A memorial service will be conducted at 5 p.m. Sunday, November 17, 2019 in the Henry Funeral Home Chapel. The family will receive friends one hour prior to the service in the funeral home.

The family of Randy Lee Campbell created this Life Tributes page to make it easy to share your memories.

Send flowers to the Campbell family.