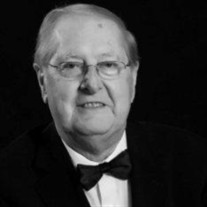 Renald (Ren) P. Morani March 17, 1934 – April 29, 2020 Renald P. Morani of Naples Florida passed away on April 29, 2020 in Fishersville, Virginia while visiting family. Ren was 86 and is survived by his wife Josephine J. Morani, sons, Richard of Fairfax, Virginia, and David (Linda) and grandchildren, Michael and Ashley, of Fort Defiance, Virginia. Ren was born in Herrin, Illinois on March 17, 1934 to parents Martino and Angela (Vago) Morani, who both immigrated to the United States from Inveruno, Italy in 1924. His parents proceeded him in death as did his sister Mary Fox of Herrin, Illinois. On December 29, 1956, Ren married Josephine Jane Lutostanski of Zeigler, Illinois. They met at a church social dance in 1951 at the age of 17 and were married for 63 years. Ren graduated from Southern Illinois University, Carbondale in 1957 with a Bachelor of Science degree in Business Administration (Accounting) and was a member and officer of the Tau Kappa Epsilon Fraternity. Ren immediately began his government career with the U.S. Army Audit Agency, in St. Louis, Missouri, and then transferred in 1967 to the Defense Audit Service in Washington D.C. In 1979, he accepted a transfer to help establish the new Office of Inspector General at the Department of Transportation. In 1982, he moved over to The Office of Inspector General at Veteran’s Affairs where he served as Deputy Inspector General, Acting Inspector General and in 1988 was nominated as the Inspector General of Veteran’s Affairs by President Ronald Reagan. He completed his 36 years of government services as the Veteran’s Affairs Deputy Assistant Associate Administrator for Planning and Policy. During his government career, he received several awards including the President’s Meritorious Service Award, the Distinguished Leadership Award from the Association of Government Accountants, and the Distinguished Career Award from the Department of Veteran’s Affairs. Ren was active in youth sports in the Northern Virginia area, having coached and managed his son’s teams in the Vienna Virginia Little League program. He continued to serve for many years on VLL’s Board of Directors and as Treasurer. In 1977, he was voted into the VLL’s Honor Roll. He continued to serve on the district level as the Northern Virginia Little League District 4 Administrator for 18 years, helping to expand programs for special-needs children and represented District 4 on the International Little League President’s National Advisory Committee. The last few years, prior to his retirement, he served as the President of the Fairfax County Virginia Sports Advisory Committee. Ren moved to Naples, Florida in 1997 and was an active member of the Naples Italian American Club, which promotes Italian Culture and Heritage in the Naples area. In 2010, he led the change to form the Naples Italian American Foundation, having served on their Board of Directors as President and as Treasurer for several years. His continuing dream was to complete a new building to better serve both members and guests. Ren was a member of St. John’s the Evangelist Catholic Church in Naples Florida, where he served as an usher. Arrangements are being handled in Virginia by the Henry Funeral Home, Staunton, VA. Memorial/ Funeral services will be held later this Summer at St. John’s the Evangelist Catholic Church 625 111th Street Naples, Florida. followed by interment in the Church’s Memorial Garden. A reception at the church will follow. Additional details and the specific date will be announced in the next few months.

The family of Renald P. Morani created this Life Tributes page to make it easy to share your memories.

Send flowers to the Morani family.