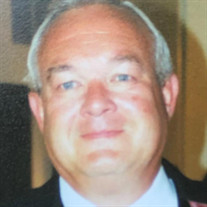 Richard “Dickie” Hamilton Beard, 71, husband of Sheila (Stinson) Beard, of Staunton, died on Sunday, August 1, 2021, at Shenandoah Hospice House, Fishersville. He was born March 16, 1950, in Staunton, a son of the late Richard “Dick” Trenton and Evelyn Elizabeth (Lightner) Beard. Prior to retirement, Mr. Beard was employed by B & S Company as a Safety Director and Estimator. He was a member of Covenant Presbyterian Church where he served as an Elder. He served on the Augusta Regional S.P.C.A. Board and as a volunteer with Augusta Health, Staunton-Augusta Rescue Squad, Augusta County Fire and Rescue Company 10, and was a member of the Staunton Elks. He was a graduate of Robert E. Lee High School Class of 1969. In addition to his wife, family members include a son, Justin Beard of Staunton; a daughter, Stacy Beard Johnson (Troy) of King William; three sisters and brothers-in-law, Alexis B. and Conrad Beaver of Green Cove Springs, FL, Susan B. and Paul Decker of Chesterfield, and Ann H. Beard-Montague and Mark of Portsmouth; six grandchildren, Tyler Beard, Addie Johnson, Wylie Johnson, Trenton Johnson, Jett Hancock, and Weston Hancock; a sister-in-law, Kathy and Tony Riolo of Springfield; a brother-in-law, and David and Lori Stinson of Haymarket; and numerous nieces and nephews. A memorial service will be conducted at 3:00 Friday, August 6, 2021, in Covenant Presbyterian Church by the Rev. John Peterson. Due to COVID-19 restrictions, persons wishing to attend the memorial service are asked to R.S.V.P. by calling Covenant at (540) 885-2138. (Masks will be required.) The family will receive friends following the service from 5:00-8:00 p.m. at Valley Mills Farm, 1808 Parkersburg Turnpike, Swoope, VA. Memorial donations may be made to Augusta Regional S.P.C.A., P.O. Box 2014, Staunton, VA 24402, the Hospice of the Shenandoah, ℅ Augusta Health Foundation, P.O. Box 100, Fishersville, VA 22939; or to Covenant Presbyterian Church, 2001 North Coalter Street, Staunton, VA 24401. The family would like to express their deep appreciation to the staff at UVA Oncology, Augusta Health, and Hospice of the Shenandoah. Henry Funeral Home is handling the arrangements. Condolences may be sent to the family at www.henryfuneralhome.net.

The family of Richard "Dickie" Beard created this Life Tributes page to make it easy to share your memories.

Send flowers to the Beard family.