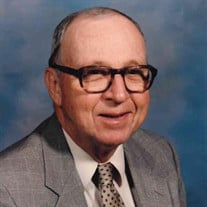 born September 23, 1929, in Allentown, PA. He was the son of Charles O. and Beatrice (Reinbold) Miller. He is survived by his wife of 63 years, Jean (Nooe) Miller; his sister, Gloria Ann Miller of Wyomissing, PA; a foster daughter, Carolyn (King) Bone of Mt. Airy, GA; sons, Richard M. (Rick) Miller of Troutville and Allen Scott Miller of Staunton; a son-in-law, John Bone; and beloved daughters-in-law, Suzanne Rogers Miller of Troutville and Thea Lane Miller of Staunton. In addition to his parents, he was preceded in death by his daughter, Elizabeth Holladay (Holly) Clingempeel. Known as “Doc”, he taught chemistry and physics at Stuarts Draft and Buffalo Gap High Schools from 1973 to 1994 where he enjoyed the camaraderie with his fellow educators and took great pride in the success of many of his students. He also taught at Guardian Angel School in Staunton. He had a PhD in Chemical Engineering from the University of Pennsylvania and a BS from Lafayette College in Easton, PA. Before teaching, he was a successful polymer chemist for Hercules, DuPont and Morton-Thiokol spending most of his industrial career in Waynesboro. In 1973 he and Jean moved their family to a farm in Swoope where he raised cattle, taught school, and was a good neighbor and friend. He was a member of Hebron Presbyterian Church. A celebration of his life will be conducted at 5 p.m. Sunday, May 2, 2021, at Hebron Presbyterian Church by the Rev. Steve Willis. The service will be a drive in service. In lieu of flowers, the family requests donations be made to the Holly Miller Clingempeel Scholarship at Randolph College in Lynchburg, VA.(http://www.randolphcollege.edu/givenow). Henry Funeral Home is handling the arrangements.

born September 23, 1929, in Allentown, PA. He was the son of Charles O. and Beatrice (Reinbold) Miller. He is survived by his wife of 63 years, Jean (Nooe) Miller; his sister, Gloria Ann Miller of Wyomissing, PA; a foster daughter, Carolyn... View Obituary & Service Information

The family of Richard A. Miller created this Life Tributes page to make it easy to share your memories.

Send flowers to the Miller family.