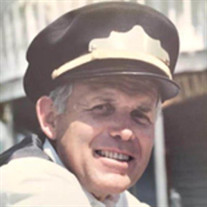 Peacefully in his sleep, Bob Aron passed from this world to be with his Lord and Savior Jesus Christ at his recent residence at Brightview Baldwin Park in Staunton, Va. Bob was born in Pittsburgh, Pa., the son of Josephine Sobler Aron and Charles Philip Aron. The family moved to Erie, Pa. in the 1940s, where Bob graduated from Strong Vincent High School and the Erie Business Center. After high school, Bob proudly served in the U.S. Naval Reserves. Bob married Joan "Josie" Cross of Ripley, N.Y. in 1954, and raised their four children in the Erie area. In the 1990s, they moved to Point Chautauqua, NY and wintered in Marco Island, Fla., where Bob served as president of homeowner associations in both communities. In the mid-1940s, together with his parents, Bob founded Erie's Colonial Bakery which he later owned with his beloved wife. Bob's beautiful hand-decorated cakes were an integral feature at weddings, birthdays and other milestone occasions for family, friends, and the Erie community. Bob was also Founder and President of the Erie Master Bakers' Guild. Later, Bob took great pride in serving as the Captain of the Chautauqua Belle steamship on Chautauqua Lake, making sure to blow the whistle and wave to his neighbors as the Belle passed by Point Chautauqua. Bob was a longtime member of Trinity Lutheran Church in Erie, where he served as an usher. Curious, adventurous and spontaneous, Bob embraced trends such as CB radios, iceboating and snowmobiling, and even rode on a mo-ped and glider. He often packed up his family on short notice for day trips to neighboring states for music, entertainment, or visits with friends and family. Deeply fascinated with local history and his ancestral heritage, he made several trips back to the 'old country' to reunite with relatives. Bob enjoyed a wide variety of interests — many of them self-taught — including beekeeping, card playing, bowling, investing, hunting with friends, small carpentry projects, gardening, political discussions and of course, baking the world's best pies, breads and pastries at home — to the delight of his neighbors, friends, and family. He especially delighted in sailing and boating on Chautauqua Lake, where he took boatloads of kids waterskiing and tubing, and even more boatloads of family and friends for ice cream, wings, concerts, and joy rides. Bob was preceded in death by his parents and brother, Charles R. Aron of Nice, France; a lifelong friend, Roy First of Erie, Pa.; and many other close friends and relatives. He is survived by his wife of Staunton, Va. and his four children: Phillip Aron (Donna) of Boynton Beach, Fla.; Jacquelyn Bednarz (Gregory) of Staunton, Va.; Cheryl Bielli (Tom) of Gloversville, N.Y. and Keith Aron of Easthampton, Mass. Seven grandchildren will forever cherish the memory of their beloved Grandpa: Brianne (Christopher) Sale; James Bielli, Robert F. Aron, Samantha Bielli, Kayleigh Aron, Alexandra Bielli and Charles Wang. Bob was "Peepaw" to three great-grandsons: Rylan, Brayson, and Camden Sale. He was also a devoted uncle, cousin, and brother-in-law to many in both the United States and Europe. With profound gratitude, the family recognizes the caring, competent teams at Brightview Baldwin Park and Augusta Health Hospice of the Shenandoah that not only assisted with daily activities but befriended, entertained and prayed with Bob. A celebration of this life well-lived will be held at a later date to be announced. Those who wish to honor Bob's memory may contribute to the charity of their choice or to the Alzheimer's Association, as Bob's life was deeply impacted by his wife's diagnosis. The family also encourages acts of kindness or visits to the elderly who may be living with loneliness in their communities.

Peacefully in his sleep, Bob Aron passed from this world to be with his Lord and Savior Jesus Christ at his recent residence at Brightview Baldwin Park in Staunton, Va. Bob was born in Pittsburgh, Pa., the son of Josephine Sobler Aron and Charles... View Obituary & Service Information

The family of Robert "Bob" P. Aron created this Life Tributes page to make it easy to share your memories.

Peacefully in his sleep, Bob Aron passed from this world to be...

Send flowers to the Aron family.